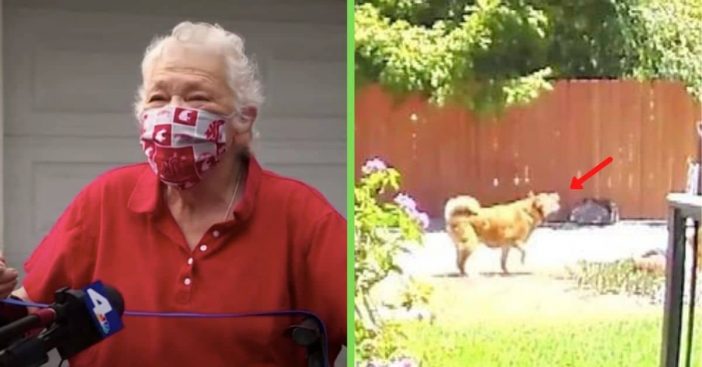 One heroic dog is capturing the hearts of many after a video has gone viral of him leading a sanitation worker to his elderly owner, who had fallen. The situation was captured on security camera footage. Gwendola Johnson is 88 years old and her dog, Sandy, is 11. They’re the best of friends. It was July 10th when Johnson was walking out her front door and fell. This left her unable to move or get up to call someone for help. Sandy was right by her side and took off to get help.

She noticed a man in a neon green shirt walking up her driveway, a man named Kirk White. He’s a sanitation worker at Glendale Integrated Waste Management. He came to pull out her trash cans in the knick of time as Sandy went to go fetch the worker. “When I saw him, I said to Sandy, ‘You go get him,’ so he did,” Johnson says.

“The way he was barking, like, ‘I have something to show you — come follow me this way, there’s something I want you to see,’” Kirk explains to NBC Los Angeles. The heroic Sandy led Kirk right to his owner and Kirk helped her up right away. When Johnson’s family saw the security footage, they say they were brought to tears.

“Sandy was a good boy, and Kirk came up the driveway just about the right time,” Johnson says.

The whole Internet is in love with Sandy. “Excellent story! Sandy would look cute in a cape, although he is adorable either way! A Super Hero!” someone writes. Another says, “Sandy is a good boy, yes he is!!!” A last comment praises both Sandy and Kirk. “Two heroes!” Watch the full clip below.