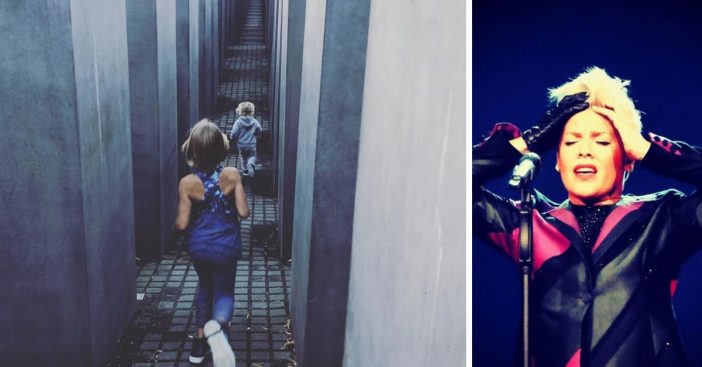 Pink is currently on her world tour and took her family with her. She has two children with her husband, Carey. Her daughter, Willow is eight and her son Jameson is two years old. She recently took them to the Holocaust Memorial in Berlin, Germany and is receiving another round of backlash from followers.

Pink shared a photo of her two children running through the Holocaust Memorial. She knew that some people would say that it was disrespectful and shame her parenting tactics. In addition, she decided to share her reasoning in the caption.

See the photo of the kids running in the Holocaust Memorial

She wrote, “And for all of the comments; these two children are in actuality Jewish, as am I and the entirety of my mother’s family. The very person who constructed this believed in children being children, and to me, this is a celebration of life after death. Please keep your hatred and judgment to yourselves.”

Similarly, the American architect who designed the Holocaust Memorial, Peter Eisenman, has spoken out about how people choose to visit the space. According to People, Peter said, “People have been jumping around on those pillars forever. They’ve been sunbathing, they’ve been having lunch there and I think that’s fine. A memorial is an everyday occurrence, it is not sacred ground.”

Many fans were actually on Pink’s side with this one. Some of the comments said, “Please don’t imagine for one second that the people who died in that massacre wouldn’t want the sound of children’s laughter to surround the space outside because it is SO HEAVY inside.”

Find out what other commenters said

Another fan said, “Just because you visit a sad place, does not mean you have to be sad and take sad photos. People would much rather have their deaths be a ground for happiness rather than sadness.”

Lastly, another fan corrected others by saying, “On another note, this site is not where any of the atrocities happened. So no one is jumping on anyone’s actual graves.”

In addition, Pink opened up to her daughter who could understand the severity of the Holocaust. Willow actually told her mom that her favorite city to visit was Berlin. Her reasoning? “Because there was a wall and people were separated, and there was a war and people were killed, and now everybody’s together and there’s no more wall and there’s no more war and that means everything that’s bad can be good again.”

How incredibly sweet is that? What’s your take on the photo?

This isn’t the first time that Pink had to react back to commenters shaming her parenting techniques.

She slammed harsh comments about her daughter simply having fun in the summer!