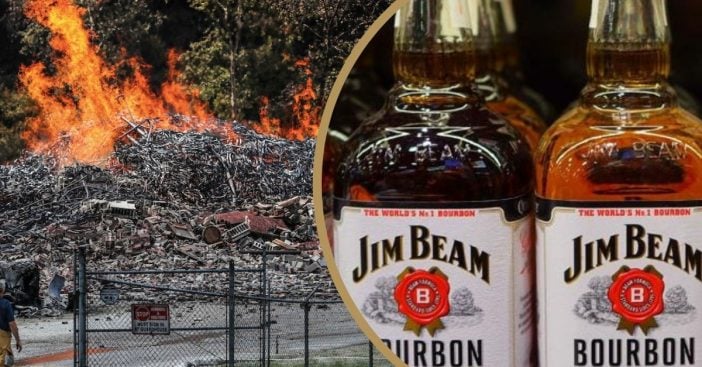 A fire has destroyed a massive Jim Beam warehouse consisting of about 45,000 barrels of aging bourbon in Kentucky. The bourbon flowed into the river and officials feared that the whiskey would kill the fish. The fire itself was massive and required the help of firefighters from four counties. The heat from the fire was so hot that it melted the firetruck’s lights.

While officials cannot pinpoint an exact cause of the fire, it’s possible that lightning may have played a role in it. Thankfully, there were no injuries. The fire was contained but was allowed to burn until midday Wednesday, July 4th.

The environmental impact of the fire

The distiller did hire a cleanup crew to control the bourbon runoff that was flowing into the Kentucky River. State environmental officials were also a large part of this cleanup. Officials say that this could have a “serious impact on aquatic life.” This is because the whiskey runoff can cause “low dissolved oxygen levels” which then leads to a large amount of fish dying off.

Beam Suntory officials confirm they are working with authorities to assess these environmental damages.

The fire will not affect Jim Beam bourbon production

The company confirms that the fire did burn relatively young whiskey, which means it wasn’t even mature enough to sell out consumers yet anyway. This means it will not affect the availability of Jim Beam bourbon towards their consumers. Additionally, the whiskey that was destroyed in the fire only amounts to 1% of its inventory.

According to reports, Kentucky distillers produce 95% of the world’s bourbon. While the growing demand for spirits continues, the fire that has occurred at the Jim Beam warehouse has proven to not halt production in any way.

For more information on this fire, take a look at the news coverage for this story below! It also includes additional information about a second warehouse that went up in flames as well.

We’re glad to hear that this Jim Beam warehouse and their bourbon will not suffer from this fire!

Speaking of whiskey, did you know Bob Dylan was opening a whiskey distillery? Take a look at the details here.