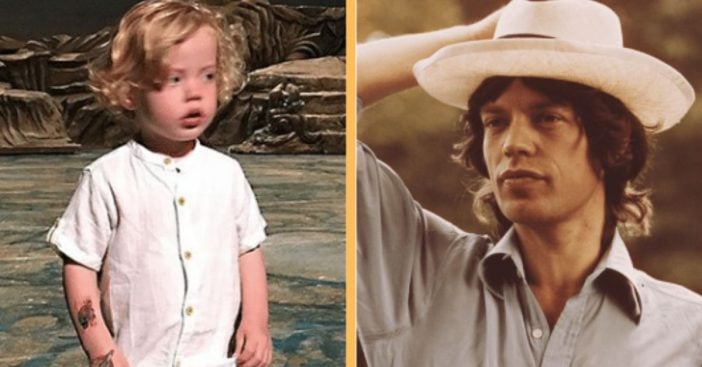 Mick Jagger, frontman for the Rolling Stones, has a 2-year-old son that is already looking just like him! It’s too adorable! Many people recognize Jagger for his iconic ‘pout’, which his son has undoubtedly inherited. His son, Deveraux, is definitely bound to be a ladies man when he’s older, just like his father!

Jagger’s partner, American ballerina Melanie Hamrick, posted the adorable photo of their son. Fans were in the comments section, noting how much he and his father look alike!

Mick Jagger’s son – do you see the resemblance?

Among some of the things fans were saying include “Spitting image,” “clone of dad” and “Jagger genes.” Many were even calling him a “Mini Mick.” We can totally see it! Others left adoring comments for the 2-year-old.

“I like that you’re preparing him for life on a stage. I’d love to see him follow in his Adonis father’s footsteps! Thanks for sharing these treasures with your fans. I for one really appreciate seeing your beautiful boy,” one person says. “No denying that’s a Jagger! What a doll,” says another.

What Mick Jagger is up to these days

Jagger recently reported that he underwent heart surgery, which prompts the cancelation of the rest of their North American tour. While no rescheduling for these tour dates has been announced yet, the singer has made it clear that he will be taking it easy in order to fully recover.

“Thank you everyone for all your messages of support, I’m feeling much better now and on the mend – and also a huge thank you to all the hospital staff for doing a superb job,” Jagger said in a statement on Twitter.

Thank you everyone for all your messages of support, I’m feeling much better now and on the mend – and also a huge thank you to all the hospital staff for doing a superb job.

Reports say that Jagger underwent heart surgery to replace a valve and had a stent inserted in a sagging artery. He was on the mend for a while, but thankfully, is back in tip-top shape! He rescheduled his summer tour dates and is back on the road during the months of June, July, and August 2019.

The band’s “No Filter” tour was scheduled to take place from April 20th to July 29th. The lead singer himself took to social media to apologize for having to indefinitely postpone the tour and said that he was “devastated” about it.

Check out the video below of the opening night from the Rolling Stones’s “No Filter” tour! Jagger looks great!

Mick Jagger is a father to many other children.

He’s definitely an expert dad as he leaves the funniest “dad” comments on his son’s Instagram page. Take a look!