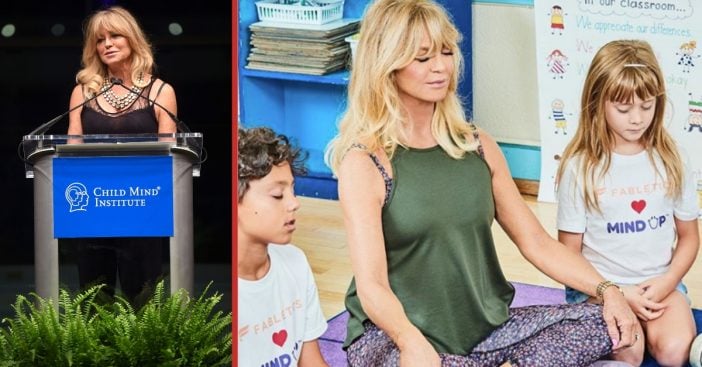 We might know Goldie Hawn as an award-winning actress but back in the day she actually had a lot of anxiety! Recently, the actress was honored in the Child Mind Institute‘s 5th Annual Change Maker Awards. She was presented the Activist Award by Katie Couric and recalled in her acceptance speech how anxiety-ridden she was as a child.

However, this anxiety helped pave the way for Hawn to become an advocate for child mental health down the road. This also helped spawn the Goldie Hawn Foundation and its non-profit program, MindUp.

“I lived with anxiety as a little girl,” Hawn told the audience during her speech, “I thought the Russians were going to bomb us. I thought I could die without ever kissing a boy. I suffered anxiety every time I heard a siren.” She also says that her anxiety never quite stopped, even when she began performing on the NBC show Rowan & Martin’s Laugh-In.

“The next thing I know I’m doing a TV show and I was having nonspecific anxiety attacks. I didn’t know why I was feeling anxious or what was wrong with me, when I would go into public and feeling like I could vomit. I didn’t know why I wanted to sit on a couch while I was supposedly becoming something that everyone was so excited for me.”

She continued,  “I suffered for about a year…[then] I took charge and saw a doctor. But that was the time when I was 21 and I realized that I had a mind, that I was going to fix that mind and I was going to make sure I knew and understood everything that was happening and why it was happening.” Hawn says that she finally knew what she desired out of seeking help for her anxiety; happiness. And she reveals she found that through meditation.

“I went for meditation because it was the thing to do, and when I did, it was like I can’t ever explain to you—it was the most joyful experience I’ve ever had. I felt like I returned back to my deepest part, to my heart, to my joy. It just hit this seed of joy that I always had as a young girl. Because all I ever wanted to be was happy. That was my goal.”

Hawn’s foundation, The Goldie Hawn Foundation, is just part of the incredible work she’s done to help children with mental health issues. Their new program called MindUp is a neuroscience-based program that gives children the knowledge and tools they need to help manage stress and regulate emotions amongst other things.

“It’s amazing, these kids are able to manage their stress. They realize their thinking is what creates their formality, so knowing how your brain works is such an asset. It’s like, ‘Oh my God, that’s my muscle I know how to work it,’” she explained to PEOPLE prior to accepting her award, “That’s what we are giving kids. It isn’t just medicine or mediation. It calms them down, and that is everything. And they are in control. I just want to see kids smile and live safely.”

Be sure to SHARE this article if you love the work that Goldie Hawn is doing to help child mental health!

Check out the video below where Goldie Hawn talks about the panic attacks she was getting early on in her fame: