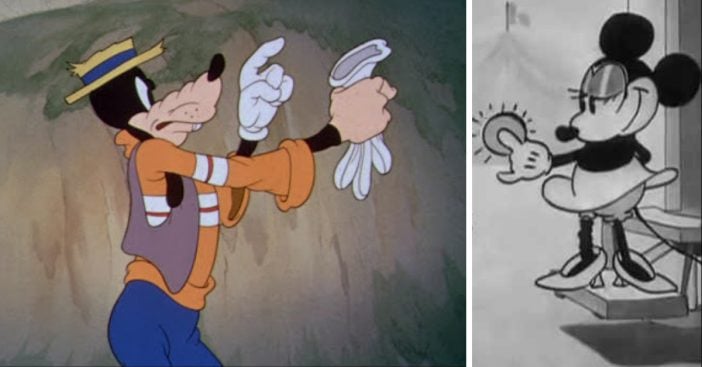 Have you ever stopped to think about how many Disney animated characters wear gloves? Perhaps you’ve never really thought about it in depth or figured it was just a cute feature. Actually, there are several real reasons that many of the Disney cartoon characters wear those iconic white gloves.

Think about some of your favorite and the most popular Disney characters; Mickey Mouse, Minnie Mouse, Donald Duck, etc. They all wear white gloves! The reason is that it gives the animators a shorter process. They are able to create characters much faster. This helps pump out those Disney movies and television shows you love that much quicker.

One reason is that it helps out the animators

Creating round edges such as gloves on a hand, make the process of animation faster. They are able to simplify and create those characters much easier. Instead of creating intricate hands on the characters, they use the same tried and true white gloves.

When Disney cartoons first came around, they were in black and white. Giving the characters white gloves were also a way to make their hands stand out. Walt Disney was one of the first animators to put gloves on his characters and it seems it was a smart idea, especially if they still stick with it today. These days it is so much easier and more advanced to create animations, so it is interesting they still have characters wear gloves. Now, it is just iconic and people expect it.

Another reason that the characters got gloved hands was to make them more human. Yes, these characters are animals, but they are anthropomorphized (meaning they are human-like animals who talk).

They didn’t want Mickey Mouse to have mouse hands. In the end, they gave him gloves and only four fingers because five fingers seemed like too much for the small mouse.

Did you ever notice that many Disney characters wear gloves? Did you ever wonder why? Now you know! If you found this interesting, please SHARE with a friend or family member who has ever wondered about this!

Let’s get nostalgic, watch the video below of one of the first ever Mickey Mouse cartoons! You’ll notice Mickey isn’t wearing gloves quite yet: