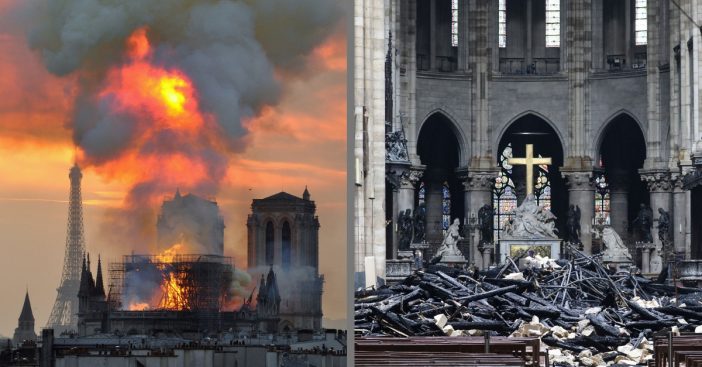 Earlier this week, we reported that the Notre Dame Cathedral in Paris was on fire. The flames lasted for several hours into the night as resident and visitors watched in great sadness and emotion. While there is still no definite cause of the fire, it is believed to have been a complete accident with no malicious intent.

Now that the fire is out, what are the next steps? Where do we go from here? The first steps are assessing the damage done and gathering the funds to rebuild, which several French billionaires have already pledged.

As previously mentioned, a number of French billionaires and major companies have already pledged at least 600 million euros in an effort to reconstruct and rebuild the Cathedral.

Paris fire brigade spokesperson Gabriel Plus told reporters that “a group of experts are analyzing all of the structures to establish the next stages.” One of the most chilling photos taken of the aftermath is seen above, a lone cross still standing unscathed surrounded by burnt debris.

Work began on the Notre Dame Cathedral that we know today, in 1163. Work was completed in 1345 and is visited by at least 13 million people every year, all according to The New York Times. It has become one of, if not the biggest landmark destination for millions from around the world to stop by and experience.

As shown above, the bell towers were spared during the massive fire. The Cathedral bells date all the way back to 1681, where they survived the French Revolution and have been rung during some of the most important moments of French history (including both World Wars).

A team of people worked hard to save many of the relics from the Notre Dame fire. One of the many relics that was saved was the Crown of Thorns believed to be worn by Jesus Christ during the Passion. Paris’ Deputy Mayor for Tourism and Sports, Jean-Francois Martins revealed the strategy that he and other people formed to save these artifacts.

“We made a human chain, with our friends from the church… to get, as quick as possible, to get all the relics,” he said. As a result, everything is safe and undamaged.

Please SHARE this article if you’ve ever been to the Notre Dame Cathedral or if you ever hope to visit one day! We hope that reconstruction will begin soon.

Check out some more extensive news coverage and photos from this story below:

Previous article: Alex Trebek Has a Video Message Update About His Cancer Treatment, For Us!
Next Post: The Real Reason So Many Disney Characters Always Wear Gloves