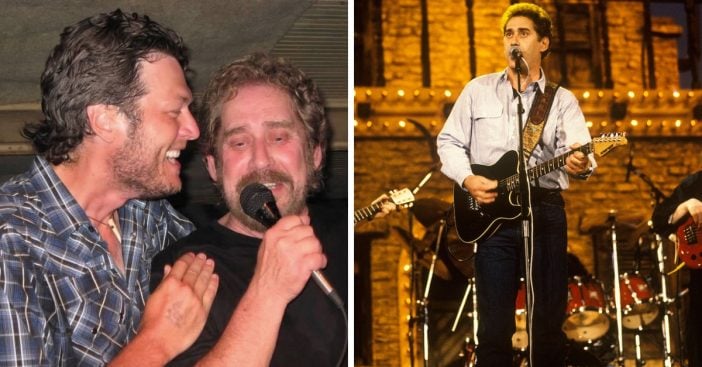 Yesterday we reported that one of the most influential artists in country music, Earl Thomas Conley, had passed away at the age of 77. Since the news broke, many celebrities, most of which are country singers themselves, have reacted brokenhearted upon hearing the sad news.

One of the country singers who was the first to speak out about Conley’s death was Blake Shelton, who had worked on a song in 2002 with the late singer. The two were close, so it’s understandable why Shelton, among others, are taking the death pretty hard.

“My heart is absolutely destroyed today… I’m sad to report that Earl Thomas Conley passed away very early this morning,” Shelton reports on his Facebook page, featuring a photo of himself singing with Conley. “Earl was my all time favorite singer, hero and my friend. Prayers to his family. We will all miss you deeply my brother. Now go rest…”

So sad to hear #EarlThomasConley passed away today. He was a huge influence on my style and songwriting. I studied his records like text books and could play every note of every song. Truly one of the all time greats in country music. #RipEarlThomasConleyhttps://t.co/IRwrhcPf2p

John Rich, another country music artist, paid tribute to the late singer with a sweet caption accompanying a video of Conley’s hit “Holding Her and Loving You.” Rich reflected on the influence that Conley had on him, saying, “I studied his records like textbooks and could play every note of every song. Truly one of the all-time greats in country music.”

Chris Young, another country music singer, had another one of Conley’s hits on repeat as he paid a short and sweet tribute to the late singer. “Sad day for country music,” he said in a tweet.

An all time great. Earl Thomas Conley passed away today. Huge influence on me. Loved him. Prayers to his family. -T

Toby Keith also referenced Conley as an “all-time great” and sent well wishes and prayers to his family during this time.

Conley’s 22-year-old daughter Erinn Scates also released a short statement on the passing of her father. According to The Tennessean, “He was a great dad, and he filled our lives with color.”

DYR has learned that according to reports, Conley’s brother Fred confirmed that he was in hospice care leading up to his death. He had allegedly been suffering from a condition related to dementia and struggled to regain his health.

Of all the country stars that have reacted to Conley’s death, it’s Shelton that was hit the most. Back in 2018, the country singer spoke very highly of Conley. He told PEOPLE, “He has a song called ‘What I’d Say’ that really takes me back. I’d listen to that thing a million times, just by myself in my studio apartment in Nashville, just trying to sing that. I wanted to sing like him because I knew if I could, I maybe could make it one day.”

Be sure to SHARE this article if you loved Earl Thomas Conley’s music. We will miss him terribly.

Check out the music video below by “Once In a Blue Moon” by Earl Thomas Conley: