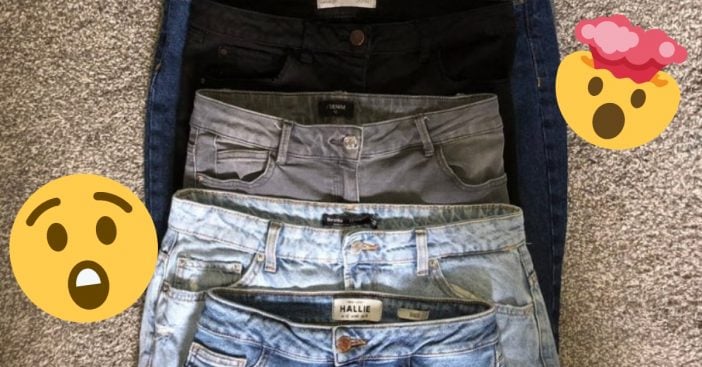 Every woman knows the struggle of trying to buy jeans at different stores. For some reason, every single store has its own version of sizing. A size 12 at one store can be vastly different at another. To give you a visual, one woman took to Twitter to share the alarming size differences in different pairs of jeans.

Chloe Martin shared the interesting photo on Twitter of seven different pairs of jeans in a row. They are all size 12, but you can see how diverse the jeans really look. She was inspired to take the photo after realizing that some of her jeans fit perfectly while others were way too tight or too lose. She was naturally confused since they were all the exact same size.

See The Photo That Went Viral

Chloe realized how common her issue is after her photo went viral and she received thousands of comments from other women. According to TODAY, Chloe said she took the photo and shared it “because my jeans all fitted differently and I was confused as to why that would be since they are all the same size. When I laid them down I was really shocked at the size difference between them all!”

Chloe also admits after she tried on all of these uncomfortable pairs of jeans, she decided to wear a dress and tights instead. Chloe said that she often doesn’t care about the number on the tag when she shops, but many other women struggle with their body when shopping. Some women don’t like to buy clothes that fit if the size is larger than they would normally wear. This can lead to self-esteem issues and more severely, eating disorders and body image struggles.

Over the years, different people have called out the fashion industry for inconsistent sizing, but it doesn’t seem to have changed anything… yet. Some stores seem to have much smaller sizes than others. Chloe called out H&M for their small clothing. She said even if the pants fit at the waist, they are always much too snug around her thighs.

While the fashion industry hopefully changes soon, keep in mind that the number on the clothing tag doesn’t mean much. Choose items that fit you well and are comfortable, not based on a size you think you should be. What do you think about this issue and the crazy photo that Chloe posted on Twitter?

If you found this article thought-provoking, please SHARE with another woman who has this same issue when shopping!

Check out a similar video below on the outrage some people felt when a company used “too skinny” models for plus-size clothing:

Previous article: Budweiser Shows Off The First Baby Clydesdale Of 2019
Next Post: 10 Secrets About Chick-Fil-A Will Make Your Time There Even Better