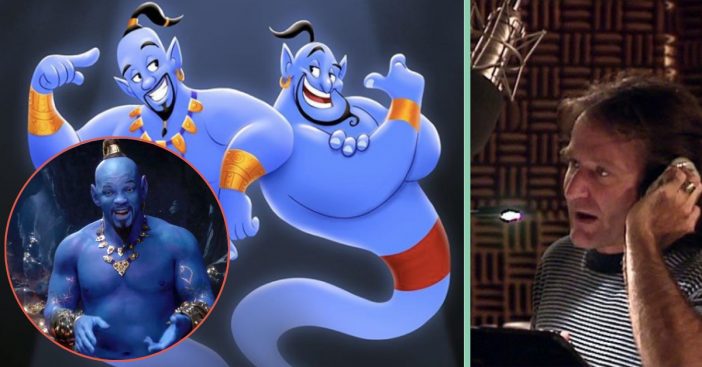 The trailer for the new, highly-anticipated live-action Aladdin movie just came out in light of a May 2019 release date. Disney fans everywhere are super excited for the new film to hit theaters! What’s even more exciting and heartwarming is the tribute post that Will Smith made for Robin Williams, the voice of the original Genie in the 1992 animated Aladdin.

The tribute post consisted of a photo of Robin’s Genie from the 1992 film next to an animated version of Will Smith‘s Genie. Robin’s interpretation of the Genie 27 years ago still delights the hearts of children today!

“I know Genies don’t have Feet… But you left some Big Shoes to fill. R.I.P., Robin!” the post read that accompanied the animated photo, paying tribute to the late actor who died in 2014.

While the new Aladdin movie is live-action, meaning there is no animation besides some CGI, artist Luigi Lucarelli lent his hand for this animated creation of what Will’s animated Genie may look like next to the original. We have to agree it’s absolutely amazing and heartwarming!

Will shared the artsy, animated image and sweet message hours after the film’s full-length trailer was dropped. Even Will posted the new trailer on his Instagram and says that he’s already seen the new movie in full! We’re jealous.

“I just saw the Finished version of #Aladdin!! IT IS FIRE. I AM HYPED!!! I can’t wait for y’all to see it,” Will says in the caption alongside the video of the trailer.

According to the trailer, much of the movie seems to be true to the original film, including how the Genie is portrayed. The Genie still has his lovable, goofy, incredibly blue demeanor, but with a Will Smith comedy twist. Thanks to the power of CGI, we can expect Genie’s magic, flying carpets, and other incredible special effects that remind us of the original film.

Of course, we’ll never forget the original Aladdin and Genie (our beloved Robin Williams) but we know he’s watching from heaven, proud as ever for the new film that’s been created. Do you remember the original Aladdin film? Who was your favorite character? Mine was definitely the Genie!

Be sure to SHARE this article if you loved Robin Williams in Aladdin!

Check out the video below for four things to know about the newest live-action Aladdin film: