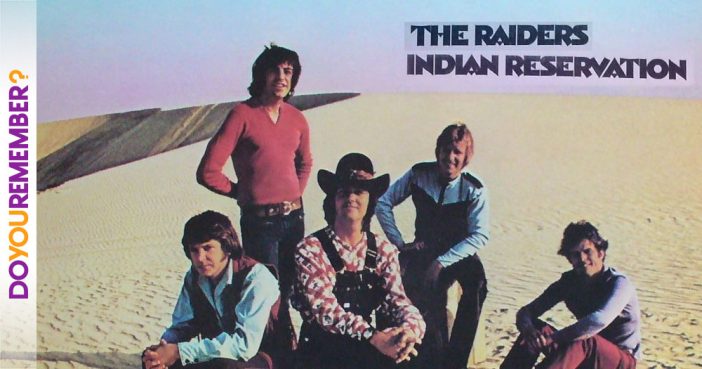 This was written by John D. Loudermilk, a singer/songwriter who recorded as “Johnny Dee” and wrote “Tobacco Road” for The Nashville Teens and “Ebony Eyes” for The Everly Brothers. The song was first recorded in 1968 by a British singer named Don Fardon, whose version hit #20 in the US and #3 in the UK.

The song is about the plight of the Cherokee Indians. Who, in 1791, were displaced from their home in Georgia to a reservation in Oklahoma. Raiders frontman Mark Lindsay, whose ancestry was part Indian, thought that this would be a good song to record. We agree that is was indeed.

The group was formerly known as Paul Revere and the Raiders. This song became not just their biggest hit, but the best-selling single for Columbia Records. Isn’t it ironic that a song like this, brimming with simmering rage and an implied threat to retake the land for the natives, was written by a white Country songwriter? It was even recorded by a band named after the white European patriots whose colonization of the US took the land from the Cherokees in the first place. And sold by Columbia Records, a company originating as “Columbia Graphophone Company” in the UK.

Lyrics for Paul Revere and the Raiders

They took the whole Cherokee nation

Put us on this reservation

Took away our ways of life

The tomahawk and the bow and knife

Took away our native tongue

And taught their English to our young

And all the beads we made by hand

Are nowadays made in Japan

They took the whole Indian nation

Locked us on this reservation

Though I wear a shirt and tie

But maybe someday when they learn