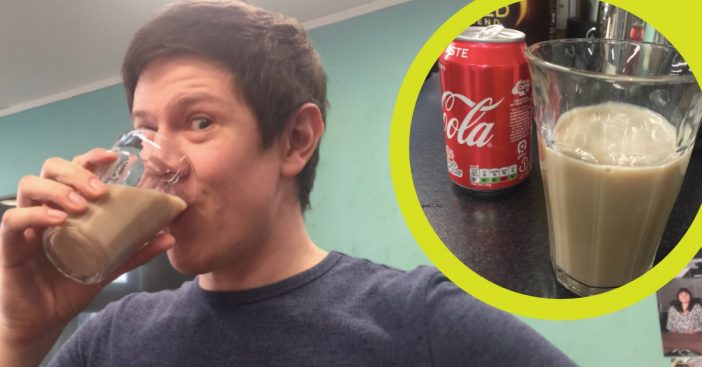 Calling all soda lovers! We need you to take a little taste test for us. The newest craze in food and drink trends has made its way to the Internet and people everywhere are trying it; Coca-Cola with milk. People who have tried it already swear it’s delicious and compare to a Coke float, made with vanilla ice cream, or even better than that.

Despite the people who have tried it and love it, there are skeptics out there who believe there’s no possible way this could be a thing, nor could it be this delicious. James Felton, a comedy writer, took to social media to proclaim his love for the new drink trend.

Milk coke is a real thing. Brummies love it. We can all move on from this discussion now, I will be taking no further questions. pic.twitter.com/dQR8bg3UAO

Let’s get to It, Bring it on Milk-Coke:

“Milk coke is a real thing,” Felton says, “Brummies love it. We can all move on from this discussion now, I will be taking no further questions.” While many people have been a little weirded out by this new fascination with milk and Coke, it just intrigued other people to try it themselves. These brave souls documented their journey to the milk Coke side on social media.

“Team #milkCoke” says Molly Applejohn as she holds a glass of it in her hand for a photo. It literally looks like chocolate milk, but we bet it doesn’t taste like it!

One person even recommended the proper portion sizes of Coke and milk to ensure that it tastes amazing. Mark that down… 2/3 full-fat coke with 1/3 whole milk for future reference.

One of the many people on social media in the tweet provided below compares milk Coke to a Coke float… it does kind of make sense. It’s all dairy at the end of the day! A Coke float does sound nice right about now…

Everyone thinks Coke Milk would be disgusting… Ever had a Coke Float? DELISH pic.twitter.com/9JArpAKdGE

Are you sold on the new concept yet? It looks like the Internet is torn right in half about what to think about Coke floats. This isn’t the first time Coke has been mixed with other odd substances or items. We reported that some people put peanuts in their Coke while it was reported that a woman dipped her chicken finger in Coke. Sometimes you just have to experiment with different things and find what works!

If you like Coke floats, this might be right up your alley, and you can start mixing one together right now with the milk that’s likely in your fridge.

Be sure to SHARE this article if you would try milk Coke!

Check out the video below on how to make your own milk Coke… it’s pretty easy!:

RELATED: No, You’re Not Imaging Things… There IS A Secret Reason Why McDonald’s Coke Tastes Better