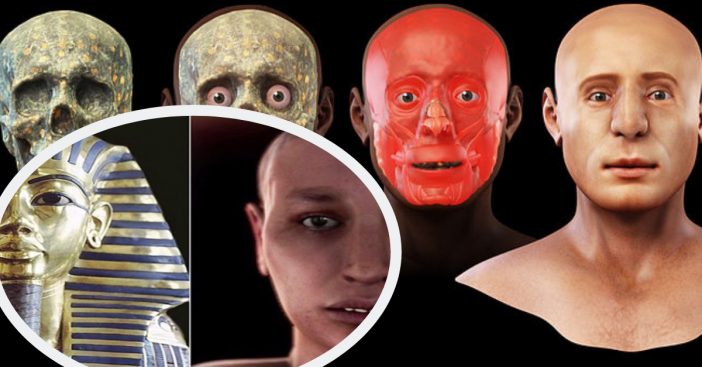 There are so many historical figures out there from centuries ago that we’ve heard of in our history textbooks, but never actually saw real photos of. Due to 3D facial reconstruction, experts can now predict how these people looked back when they were alive, and it looks nothing like the textbook images we saw way back when!

According to The Chive, “Forensic scientists examine the skulls of the deceased, using the grooves and bumps along the bone as a foundation for the layers of 3D flesh,” which is exactly how they are able to mould these predictive models of historic, ancient figures. Take a look below!

King Tut, formally known as King Tutankhamen, was buried in a mummified mask, meaning that we basically had no idea as to what he looked like in the 18th dynasty. His mask was pretty much the only proof that we had of his existence! Until now, of course.

Known as the patron saint of finding lost items and belongings, St. Anthony was a priest and was known for his incredible knowledge of scripture. While he is best-known for his knowledge in the religious order, there was little to no knowledge of what he looked like.

Robert the Bruce was the King of Scots from 1306 to 1329 when he died. He led the wars of Scottish independence against England and is one of the best-known warriors of his generation. There were never any pictures or paintings of him, despite his heroic acts being well-documented over time.

Copernicus was a Renaissance mathematician. He was also the first astronomer who showed a model detailing that the sun was the center of the universe and not the earth. He made huge contributions to the field of science and was incredibly smart in multiple fields of knowledge.

King Henry IV was King of Navarre from 1572 to 1610. When his mother, Queen of Navarre, passed away he then inherited the throne.

Johann Sebastian Bach, otherwise simply known as Bach to many musical artists today, he was a German musician and composer in the Baroque period. A sculpture of him was used to create the above CGI image. Pretty cool!

Page Page 1 of 2
Previous article: There Was A Rumor That Shirley Temple Wasn’t A Child Actor, But Was Actually A Dwarf
Next Post: Reba McEntire Announces The 2019 Country Music Awards Nominees