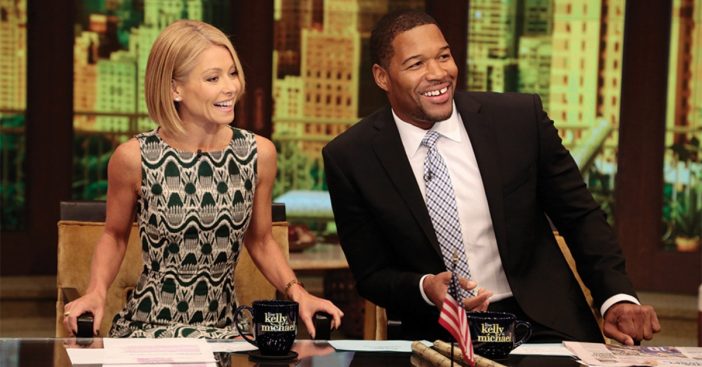 Michael Strahan, who is now a full-time anchor on the show Good Morning America, is no longer on speaking terms with Kelly Ripa. The two worked together for four years on Live! With Kelly and Michael from 2012 to 2016. They had a very public fallout when Strahan announced that he was leaving the Live! team and would be moving onto GMA.

According to reports, Ripa was “blindsided” by the sudden announcement, which left her angry and confused. She missed a week of work to think about things with the show, a decision she claims she earned after having 26 years with the show. Ripa did return to the show with some stern words in reference to Strahan’s leaving.

“Toward the end of it all, we didn’t really communicate that much,” Ripa revealed directly after the fallout between her and Michael. “I kinda looked at it like, ‘It was what it was.’ I come from a business where you have to collaborate. The show was going well? We’re all winning. That’s all that matters to me.”

She then was on the hunt for a new co-host, which would end up being Ryan Seacrest, who is still her current co-host to this date.

Strahan did have some words of his own based on Ripa’s reaction to him leaving. “I wasn’t surprised by her reaction at all, but I can’t control somebody else’s actions,” he said at the time. “I was there four years, and it’s about more than just being in front of the camera.”

Despite all of this, Strahan still credits Ripa for helping him learn the ins and the outs of TV presenting, which in turn, helped build his skill set for eventually moving onto GMA. He does admit, though, that he hasn’t “spoken to her in a long time.”

Beginning in September 2016, Strahan became a full-time co-host for Good Morning America alongside Robin Roberts, George Stephanopoulos, and Lara Spencer. Though Strahan wasn’t shocked by Ripa’s reaction, he did confirm, “I learned through all that went down with that, you can’t convince people to like you.”

Everything surely happens for a reason. Strahan has been excelling on his spot with GMA and Live! with Kelly and Ryan has also been doing exceptionally well. it was just meant to be that way!

Be sure to SHARE this article if you love Kelly Ripa and are excited for her in her career endeavors, as well as Michael!

Check out an old clip of the funniest moments/blooper reels from Live! with Kelly and Michael below: