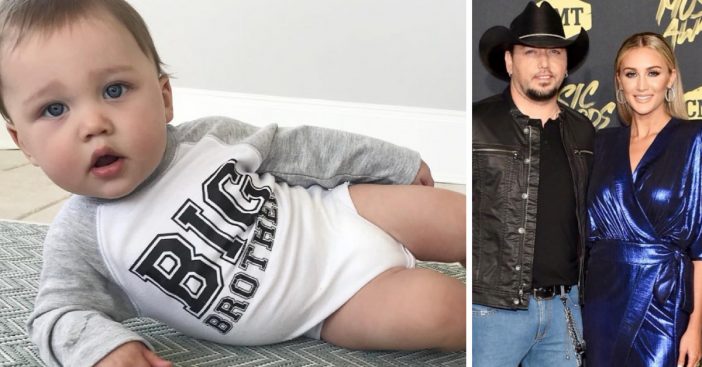 Popular country singer Jason Aldean and his wife Brittany Kerr announced today, July 10, 2018, that they are expecting baby #2. Their first son, Memphis, is only seven months old. Jason is 41 years old and Brittany is 30 years old.

Jason also has daughters Kendyl, 11 and Keeley, 15 from his previous marriage to Jessica Ann Ussery. The two split in 2013. Jason met his current wife Brittany Kerr on American Idol. Jason and Brittany got engaged in 2014 and wed in 2015.

Both Jason and Brittany revealed they were expecting in Instagram posts today with matching photos of their son Memphis wearing a “big brother” onesie. They have also posted pictures of their family often. Recently, they shared pictures of them on the 4th of July posing in American flag attire.

Jason also shares lots of photos of his two daughters with Memphis. We are so happy to see that it seems like everyone gets along well and the kids hang out together often.

Before they welcomed Memphis, they opened up about how painful the journey to conceive him was. Brittany received an endometriosis diagnosis and in vitro fertilization treatments. She says that the IVF treatments were actually harder than the pregnancy on her because it was a rollercoaster of emotions.

They have also already said they wanted to have other kids sooner rather than later. So, it is no surprise Brittany is pregnant again. We hope it was a much easier process this time around for her!

Do you love Jason and Brittany? Are you excited they are expanding the Aldean clan so soon? We are excited to learn more about the new baby!

If you liked this article and are excited by the big news, please SHARE with another country music fan or friend who loves baby announcements!