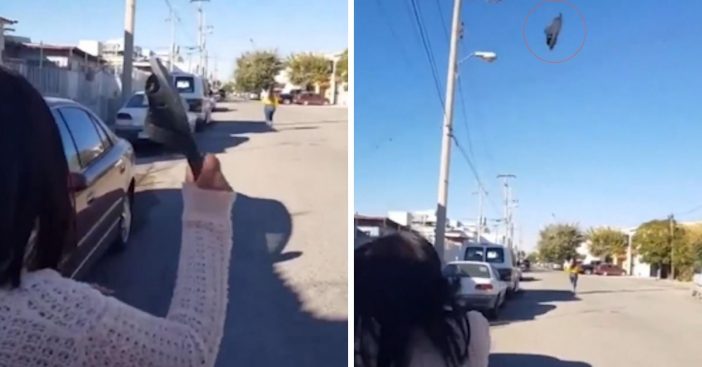 Sometimes you got to spank your children to discipline them, right? Have you ever used a flip flop? One mom did and it was absolutely crazy. After one woman’s daughter decided to leave family row, a mother followed her daughter out to the street and launched a sandal long-distance into the air and it hit her daughter smack between the shoulders.

This stopped her daughter right in her tracks! The mother had launched the sandal at least 30 meters in distance and the Internet cannot get over how hysterical the encounter was.

In the video that has since gone viral, a man can be heard in the background saying, “Go on, hit her, hit her!” as the mom raises the sandal in her hand. She throws it straight into the air, and when it hits her daughter, she’s so surprised that she falls over!

The video was officially posted to Twitter and since then, it has almost 1.4 million views and almost 63,000 likes. Many people replied to the original post, praising the mom for her throw, which was compared to an Olympic sport by one Twitter user. We can agree!

According to reports, online viewers confirmed that “chanclazo volador” or the art of throwing flip-flops is actually a popular way of Mexican mothers to punish their disobedient children. Many people online were sharing the reactions they had to the video, but unfortunately, the woman has remained anonymous and there’s no telling if she will ever come forward to talk about the hilarious video!

“All my respect and admiration for that lady! That should be an Olympic sport!” says one Twitter user. “A green beret, or any military man, is intellectually incapable of making the proper calculation to trace that impeccable parable … No. She is far above any militroncho, friend. My respects, ma’am. What level!” another says.

Be sure to SHARE this article if you thought this story was absolutely hilarious!

Don’t forget to check out the full video below:

Previous article: Mom’s Cabbage Hack Will Solve Your Joint Pain In One Hour
Next Post: Rami Malek Wins SAG Award For ‘Bohemian Rhapsody’ And Dedicates It To Freddie Mercury