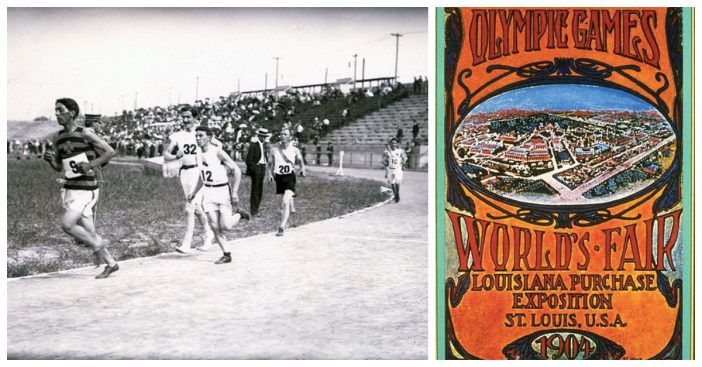 The 1904 Olympics was truly the Holy Grail of all Olympics marathons, meaning that it was just so unique that it makes for the most memorable time in Olympics history. The reason that makes the 1904 Olympics so unique is that many dangerous tactics and techniques were used that brought the athletes mere inches away from death. Not kidding.

The 1904 Olympics took place in St. Louis, Missouri and the ceremony only held about a third of the events that are now held today, and it was even closed off to female competitors. Despite those small changes in comparison to today, the most notable change is not being able to use dangerous methods to win the marathon. Yes, you know exactly where this is going.

To start off with a lighter load, the Olympics that year actually took place in the afternoon and not in the morning. The athletes had to compete in temperatures in excess of 85 degrees Fahrenheit. In addition to this, the only access to water that they had was to a well around the 11-mile marker while running.

As you could imagine, the running tracks were mainly dirt roads, so with the cars and horses riding ahead of them, it caused massive breathing problems for the competitors. In addition to not having much water, the visitors were not entirely accustomed to the water and many of them suffered from intestinal disorders.

There are also some individuals who are remembered in history for some of the weirdest stories to come out of the 1904 Olympics. Cuban postman Andarín Carvajal was the most unprepared participator in the race. Not only did he not even eat in 40 hours or wear running shorts, but he also stopped to chat with every crowd nearby the course. He somehow finished in fourth place.

The first South African men also participated in this Olympics and were expected to finish in record time. Len Tau and Jan Mashiani were the first to compete from the Tswana Tribe of South Africa. However, one of them ended up in ninth place and the other was chased off the course by aggressive dogs, putting him in twelfth place.

There was also a runner named Frederick Lorz who actually took a car ride in hopes that he could meet up with the rest of the competitors near the finish line and potentially win. This was only after he collapsed from dehydration after running 9 miles. He was actually almost hailed the winner until someone called him out for cheating by means of a car ride to the finish line.

The actual winner, Thomas Hicks, might actually take the cake for the weirdest story to come out of the 1904 Olympics. Hicks had made it 10 full miles when he started to become extremely run down and exhausted. All he wanted was to rest, but his care team would not let him. Instead of giving him water, they gave him a dose of “sulfate of strychnine”, otherwise known as rat poison. A higher dose would have killed him, but back in the day, it was used as a stimulant.

Hicks began pushing himself to continue when he learned he had the chance of winning after Lorz was disqualified. His trainers did not believe he could make it, so they gave him more rat poison with egg whites, and washed it down with brandy. They continued the egg whites and brandy combination with the now-hallucinating Hicks until he crossed the finish line successfully.

Four doctors and an hour of rest were necessary until Hicks could leave the Olympics grounds.

Please SHARE this article if you loved hearing about these 1904 Olympics stories!