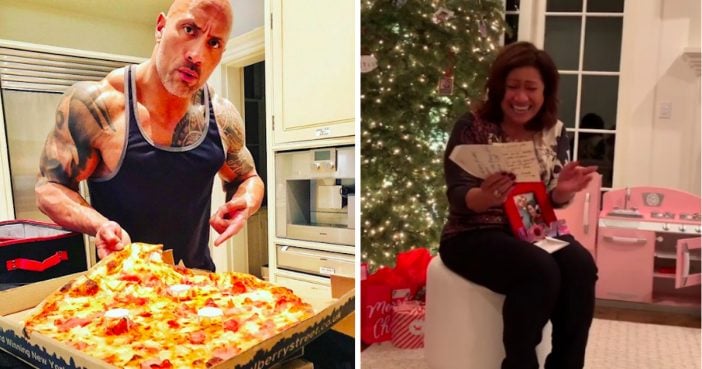 For the last 22 years, the world has gotten to know how heartfelt and dedicated Dwayne “The Rock” Johnson is. When he first started out as a wrestler in the mid-’90s, he didn’t have much money. Since then, he has become a famous household name and a multimillionaire. The Rock has often talked about coming from humble beginnings and where his family once was financially.

Growing up, he never lived in a house that his parents owned. They moved a lot while he was a child and often didn’t have a lot of money to spare. Things have drastically changed, as The Rock has worked tirelessly as an actor and producer, as well as working on numerous partnerships and endorsements over the last year. Last year, he made over $125 million between all of his projects and was listed as one of the highest-paid actors in Hollywood.

Now that The Rock has all of this money, he hasn’t forgotten about the woman who raised him. In the past, he has taken care of his parents Ata Johnson and Rocky Johnson. He first bought them a house in 1999 and though his parents have since split, he still cares for them both. He has bought both of his parents cars. And now, he’s gone above and beyond to give his mother a new gift. For Christmas, The Rock surprised his mom with a brand new house of her choice.

This one felt good.
Surprise! Bought my mom a new home for Christmas.
All our lives growing up we lived in little apartments all across the country. Lived like gypsies on the road from one state to another.
The first home my parents ever lived in was the one I bought for them in 1999.
They divorced about 5yrs later and as with life, stuff happens and things got a little complicated.
Since then I always made sure my mom and dad have everything they’ll ever need – houses, cars etc.

Happy Mother’s Day Mama Rock. The OG Johnson matriarch holding it all down. It’s incredible when I think about what this woman has been through. What she’s had to overcome. Like so many mothers out there, sacrificing so much to do her best to raise a good (most of the time;) boy into a good man. My gratitude, love and respect is boundless. And even though she looks high as a kite in this picture, truth is she’s never hit that Devil’s Lettuce. Unlike her son. Never mind. #HappyMothersDay

But the house this time is a special one and the timing is very meaningful.
I told her to treat this card like it’s “Willy Wonka’s Golden Ticket” because she gets to choose any home she wants – anywhere she wants.
I always say, if you got a good mama, then you gotta pretty good shot at becoming a decent human being.
And somehow, somewhere along the line I became one lucky SOB to be able to make stuff like this happen.
Merry Christmas Ma and WOOOHOOO enjoy your new home.
Dwanta

The Rock has dubbed himself Dwanta Claus over the last few years, by handing out generous gifts to his friends, family members, fans, and those less fortunate than himself. Can Dwanta Claus visit us next Christmas?

You can watch the surprise video below: