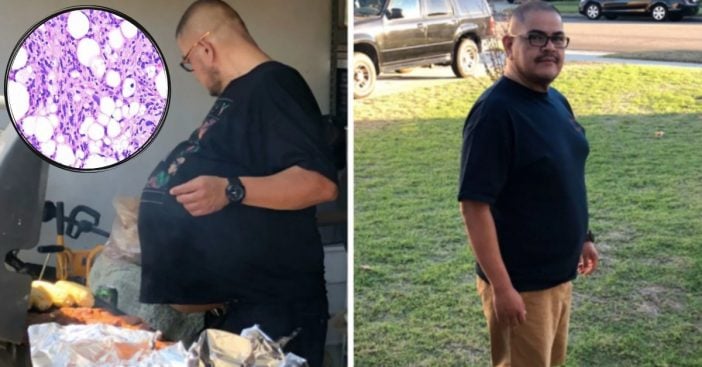 Hector Hernandez claims that he’s always been a pretty hefty guy and it never really bothered him. That is until he noticed the majority of his body was getting smaller while his stomach was growing bigger by the minute. He had formed a “beer belly,” despite not even drinking much beer, and his friends began to tease him for it and strangers began to stare.

Clocking in at 300 pounds total, he had been struggling with issues such as heartburn, constipation, and shortness of breath. That was when he consulted his doctor about the issue, to which his physician replied that some people just carry their weight differently than others.

*Warning: This article contains a graphic photo of a surgically removed 77-pound tumor. Read at your own risk!*

Despite what his doctor told him, he sought out a second opinion due to feeling heaviness in his stomach that was hard to the touch.

He was ultimately diagnosed with retroperitoneal liposarcoma, which is a rare but cancerous tumor that forms in the fat cells. No one knew when the tumor began its growth or why, but they knew it was 77 pounds total.

Hernandez revealed that he was very confused and shocked, but also relieved that he finally had an answer to his long-asked question.

“I had a lot of support and prayers from family and friends,” Hernandez said, “I finally left it in God’s hands.”

William Tseng, a surgical oncologist and assistant professor at the Keck School of Medicine at the University of Southern California, was the surgeon who operated on Hernandez’s tumor. Tseng said that his tumor was the largest one he’s ever removed.

The surgery was hours long and there were, fortunately, no complications in Hernandez’s case. His blood vessels and organs were all spared, despite one kidney had to be removed as it had suffered some damage. Otherwise, Hernandez’s surgery was a success!

As for the aftermath of the surgery, Hernandez will not need to undergo chemotherapy or radiation. Instead, he will need to have follow-ups periodically since liposarcomas often return after the initial removal.

Hernandez claims that he feels ‘totally different’ now. He is much more energetic and, obviously, several pounds lighter! A GoFundMe page was made to help fund the costs of Hernandez’s recovery, where those interested can still donate.

Be sure to SHARE this article if you loved this recovery success story! Don’t forget to seek help if you ever feel something is wrong with your body.

Previous article: CDC Confirms Reports Of 116 Cases Of Polio-Like Illness Across 31 States
Next Post: You Can Get A Luxury, Spacious Tiny Home For Less Than $40,000