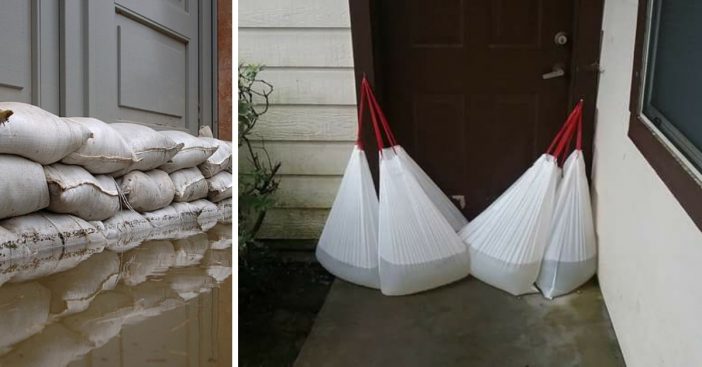 Hurricane season is finally coming to an end on November 30th and it’s been one hell of a season for sure. The United States has dealt with some pretty record-breaking storms, including Hurricane Florence and Hurricane Michael, which nearly reached Category 5 status upon landfall. Many are still dealing with the aftermath of last year’s hurricane season.

As these storms become more and more powerful by each season, victims of these storms are sharing methods as to how they prepare for the onslaught and how they deal with the aftermath. One of these tricks is bags of water to replace sandbags.

Why Do You See Bags on Doors?

During the storm preparation period, it’s common for stores to run out of sandbags quickly because everyone is fending for themselves. While sandbags shouldn’t be 100% relied on, they can certainly help. Irena Karolak, a spokeswoman from Pinellas County, Florida, spoke about the usage of sandbags and the best thing to do with the onset of a hurricane.

“We tell residents not to rely on sandbags to protect their homes from flooding or storm surge,” she says, “With hurricane storm surge, the best thing is to brace your home, windows and garage doors and protect yourselves.”

Former Federal Emergency Management Agency administrator, Craig Fugate, also gave his insight on the most effective way to protect your home with sandbags or waterbags.

“To do it most effectively, you’ve got to completely seal off all the ways water can get into your foundation and through the ground floor,” he says, “What the average person needs is far beyond the number of bags you’re going to get from most of these centers.”

So, where did the waterbag method come from?

It actually came from a Facebook post by user Edward Obediah Sweat, which is unfortunately no longer available to the public. He claims that by filling a trash bag with one-third water is a good substitute for sandbags, especially if you need one in a pinch.

Edward also gave additional tips to others that live in hurricane-prone areas. He said that using duct tape as a way to seal your garage from water intrusion is a great tool in addition to placing 5-gallon paint cans underneath your furniture so they don’t get wet!

While Edward’s Facebook post is no longer public, his full statement can be viewed on American Web Media.

Please SHARE this article to spread the news about this hurricane-preparation method. You could save a whole lot of time and effort for next year’s hurricane season! Check out an animated video below of the 2018 Atlantic Hurricane Season.

Previous article: Remembering Roy Clark, Host Of ‘Hee Haw’ & Musical Virtuoso
Next Post: According to Science, Wives Are More Stressed Out From Husbands, Not Kids