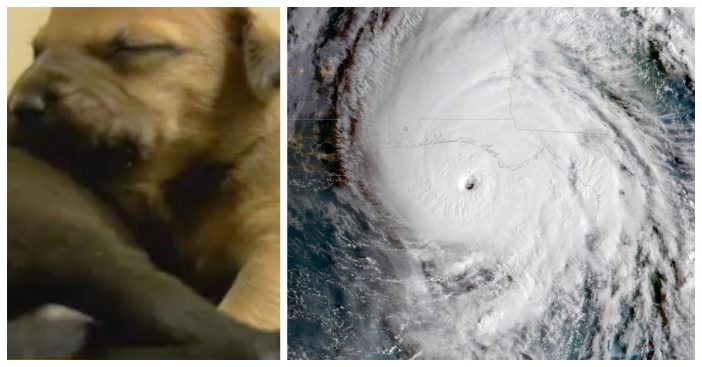 The Naples Humane Society sent four of their team members to Tallahassee with cargo vans filled to the brim with crates for the animals. According to the Tallahassee Animal Service Center, they were not able to care for the animals during the storm. Had a Category 4 hurricane (that was just 2mph shy of becoming a Category 5) slammed into this animal center, there’s no conceivable thought of what the outcome would have been.

According to several animal shelters in the southeastern area of the U.S., they reached out to other humane societies to help clear out their shelters beforehand. This was after the National Weather Service in Tallahassee reported that a storm “of this strength has NEVER made landfall in this region and thus this is an event that will have unprecedented impacts.” Meaning it was time to clear the shelters and get the animals to safety.

The animals that were rescued will now be going through an intake process, which consists of medical and behavioral evaluation. Then they will be put up for adoption.

Naples Humane Society’s community affairs director Jonathan Foerster spoke about their help and services prior to Hurricane Michael striking the Florida Panhandle. He said, “We are always available to help in times of crisis like this… We’ve actually sent people across the country to help in other major animal rescue situations.”

Some of the other major animal rescue situations include rescuing dogs from dogfighting rings. While the Naples Humane Society did have team members on call during Hurricane Florence, they did not receive any calls for assistance during that storm.

As previously mentioned, many other animal shelters required assistance from outside humane societies to help clear their shelters. This was due to their buildings not being strong enough to withstand a storm of that nature and that kind of power. Thankfully, many other shelters along Florida’s Gulf Coast survived the storm, and many of the workers there stayed with the animals for the duration of the storm.

The Naples Humane Society has stated that since the storm has subsided, they plan to go back and help with further assistance if needed.

Be sure to SHARE this article if this heroic story warmed your heart! Don’t forget to check out the video below of rescue efforts that are underway for animals after the storm.