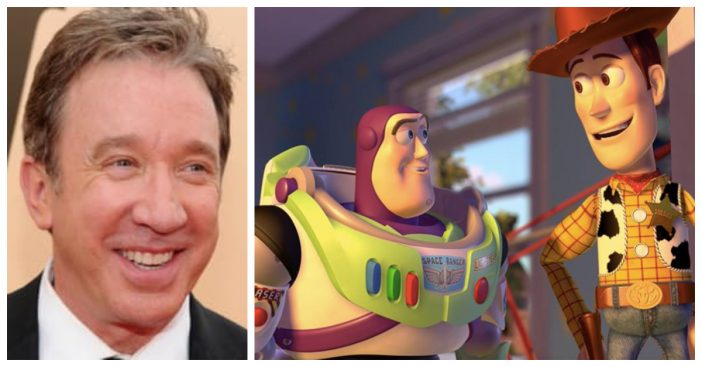 It is official that we are getting a Toy Story 4 by June 2019 and Tim Allen, the voice of Buzz Lightyear, says it’s a doozy. The Toy Story franchise has been a beloved series since the first film was released in 1995, starring Woody and Buzz Lightyear’s crazy adventures while also trying to be home in time for the big move.

The 4th film is set to arrive nearly a whole decade after Toy Story 3 hit the big screen and it was pretty emotional. According to Tim Allen, though, the 4th film might be tugging at the heartstrings of Toy Story fans even more than the 3rd. He also implied that this will most likely be the last film of the franchise.

Tim Allen spoke to The Talk about the new movie and the final, heartbreaking scene that he could barely get through.

“It is so emotional, it’s so funny, it’s so big, the idea they’ve come up with, I’m startled. I couldn’t even get through the last scene. I would love to be a Washington leaker,” Allen joked, “They’ve got great characters but a couple of scenes toward the end were really hard to get through.”

Allen continued to talk about the series and how impressed and happy he was to be part of a series that just continues to improve. “Somehow they were able to advance this wonderful story. It walks the line between comfort — you know what’s going on — and discomfort — wondering what’s gonna happen. It’s terrifically emotional,” he said.

Allen also spoke separately to Entertainment Weekly, saying that, “[they] could have easily ended with No. 3 being the best of the bunch,” insinuating that Toy Story 4 might just be the last hurrah.

Many of the series’ fans are taking to social media to entertain the idea of possible plots, and some of them are scarily creative and heartbreaking.

“Plot:
Andy is now old and on his death bed. The toys go on a journey to be with him in his final days. In his final moment the toys offer Andy a way he can live forever. The same way they all did. By becoming toys.

Post Credit Scene:
A toy wakes up in the room of Andy’s granddaughter. Woody approaches him to welcome him home.

What’s the takeaway from all of this? A professional voice actor who has been playing the same role for 20+ years could barely get through an emotional scene in this film. We’re all doomed to be crying over talking toys in 2019, folks.

Please SHARE this article if you’re psyched for the new Toy Story 4 movie! And don’t forget to grab your box of tissues.