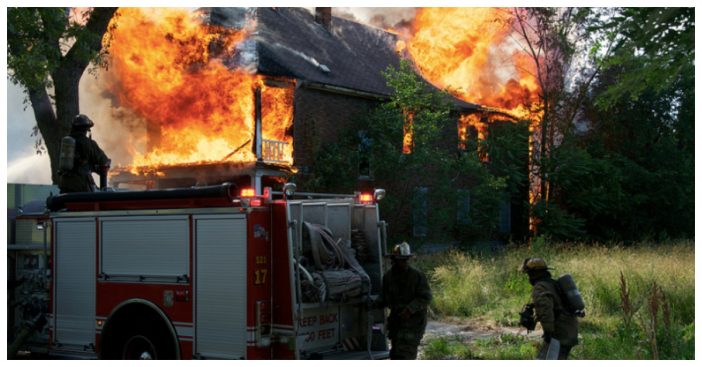 This one’s a doozy, folks. A naked, intoxicated Florida man recently burnt down his home trying to bake cookies on his George Foreman grill. There is so much wrong here and the nudity isn’t even the worst part. He apparently drank two liters of vodka and had been smoking marijuana since 9 a.m. that day. But the chaos obviously didn’t start until he tried to bake cookies on a grill.

A local report stated that the intoxicated, nude man left the cookies on for too long unattended and the grill caught fire. How did he try to put out the fire? Dry towels, which then got sucked into the blaze as well.

Apparently, when the fire department showed up to his house, the man opened the door, muttered “I’m sorry,” then closed the door again. Firefighters and police made their way into the blazing home wearing oxygen masks to protect them from the flames.

They escorted the man out of his home safely, stating that the man likely would have died from smoke inhalation had he not been helped out. He was apparently in too much of an intoxicated trance to notice anything.

There have been tons of crazy news coming out of Florida lately besides this drunk, naked man attempting to bake cookies on a grill. Just a few weeks ago, a Florida man brought an actual, live alligator into a convenience store when he was on a beer run. The man was apparently a bit intoxicated at the time as well.

He apparently said after the ordeal took place that he doesn’t remember any of it and he has no idea where he got the alligator from. Classic.

There have also been reports of a Florida man screaming profanities on live newscasts in the middle of Hurricane Matthew in 2016. Not only that, but there were also reports surfacing of a Florida man dumping an entire port-o-potty at a 7-Eleven store as ‘revenge’ for the police banning him from the store prior to that incident.

There have been worse incidents to come out of Florida than just these laughable scenarios. Back in 2012 reports of bath salts were flooding the Florida area which, if ingested, caused the individual to act like a ‘zombie’ and turn into a cannibal. A Miami resident had taken some of these bath salts and attacked a homeless man. The victim is still alive today but has lost both of his eyes and part of his nose due to the attack.

Please SHARE this article if you think all these Florida stories are interesting.