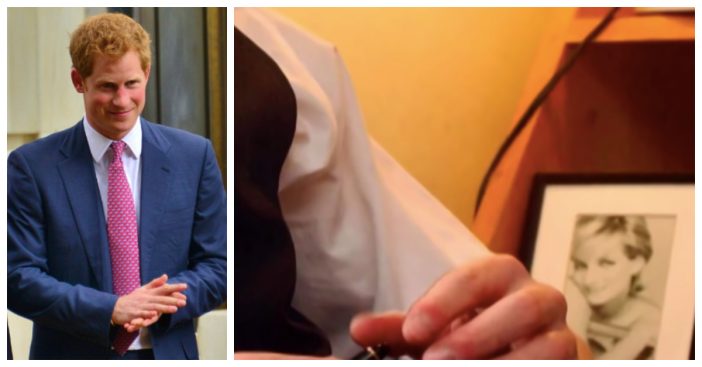 When Prince Harry was a teenager, he kept a photo of his late mother, Princess Diana, in his room while he was away at boarding school. Both Prince Harry and William maintained a close relationship with Diana during her lifetime. The connection continued and may have even grown stronger after Diana had passed away after being in a fatal car crash in 1997.

The photos that have resurfaced show a young, high-school aged Prince Harry in his dorm room at Eton College. Harry spent five years total at the school and even participated in athletics and in the arts.

According to TODAY, students were allowed to decorate their dorms, but couldn’t overdo it. Yes, this rule still applied the Royal family members as well. Young Harry decked his room out in photos of his favorite celebrities, a large stereo system, and the flag of England. However, his black-and-white framed photo of his mother was front and center. It is an incredibly sweet tribute to his late mother.

That was not the only tribute photo to his family members. Harry also pinned up another photo of his mother and one of his father on his wall and also kept another photo of his grandmother, Queen Elizabeth II, on his nightstand. Despite having the reputation in his family of being a “bad boy” he was definitely raised to be family-oriented!

According to TODAY, the town of Eton is incredibly special to Prince Harry and his wife, Meghan, and it was mainly because of his high school years. As aforementioned, he had a love for the arts, but his true passion was for the athletics, particularly rugby and soccer.

Harry joined the Combined Cadet Force while at Eton, which provided military experience to the boys who attended. After Harry would leave Eton, he would serve as a soldier in Afghanistan. Still, Harry credits his five years at Eton to making him the wholesome man he is today and instilling in him a love of Windsor.

Be sure to SHARE this article if you loved young Prince Harry and still love him now!

You can see more of Prince Harry’s former dorm room at Eton in the video below: