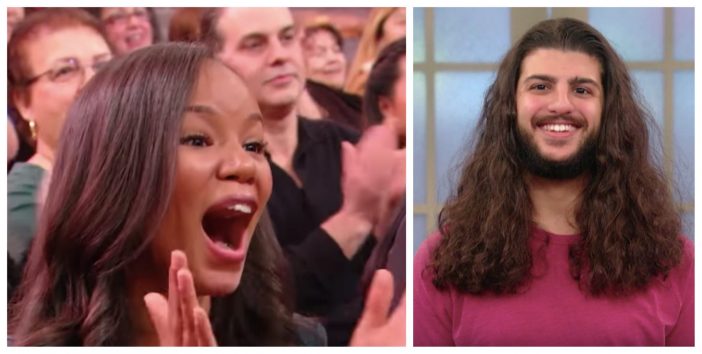 A man named Joe showed up on the Rachael Ray Show after he hadn’t gotten his hair cut for 6 whole years. According to the show host, Joe had started growing out his hair due to rebellion because his parents never wanted him to have long hair. His hair was so long that it outgrew his girlfriend, Angie’s, hair.

When the stylist pulled the scissors out to begin trimming her boyfriend’s hair, Angie started to cry. The reason being is because, as she says, “It’s overwhelming,” followed by, “I’ve never seen him with short hair before… they were happy tears.” She also agreed with Rachael that it’s like the ‘end of an era’. The results are amazing.

Upon the reveal to the audience of the new, stunning look, his girlfriend couldn’t help but freak out. And there were no tears this time! She was super happy about the new change, in addition to the whole audience also throwing around their fair share of ‘wow’s and ‘oh my God’s.

“Dude, you look hot!” Rachael exclaims upon Joe making his reveal, and we think the whole audience agrees. When Joe walked out and began looking at the side-by-side photos of himself, he even agreed that the other ‘do looked a little bad and dated, or as Rachael said, ‘hippie dippie’.

Angie started making grabby hands at her boyfriend when asked how she liked the new haircut. She simply couldn’t stay away and ran up on stage to see the new ‘do up close and personal. The stylist joked playfully, saying, “Don’t touch the hair,” rightfully so because in 30 seconds flat she was running her fingers through it. Angie was definitely a fan of the shorter, sleeker, and sexier hair!

“I’m not crying now,” Angie stated happily as she stood next to Joe. She couldn’t keep his eyes off him! Well, no one could keep their eyes off him, technically. Joe is apparently a waiter in New York City and joked with the stylists that if the haircut was as good as they’d hoped for, they’d get chicken wings from the restaurant he worked at. We’re thinking it worked out!