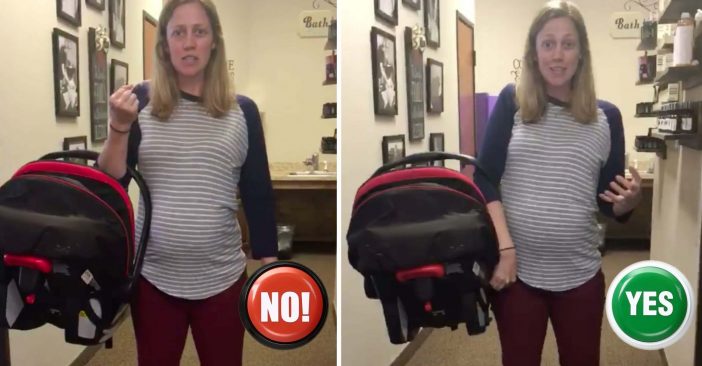 For a long time coming, carrying car seats around has been one annoying mom thing to handle, especially if you don’t have any arm strength! However, a video has surfaced of a mother of two showing the proper way of how to carry a car seat. This video surfaced because of the way most moms carry car seats putting unnecessary strain on their back, hips, and shoulders.

The video received a lot of feedback, some questioning the technique and some praising the mom for sharing the wealth with them. People are also wondering about strain to other parts of the body in addition to the child’s safety. From what we can gather, it seems to be a matter of preference.

The woman in the video suggests looping your carrying arm under the arm of the carrier, then sliding it to the side of the carrier on the same side. She demonstrates this technique seemingly effortlessly. In the video she guarantees that the mommy watching on the other end will have a much easier time carrying their baby’s car seat with that technique.

As noted previously, much of the feedback came from other questioning moms who are obviously trying to find helpful tips such as this one. However, a lot of them were not so keen on the idea, some of them having tested it out. One person who commented was even a chiropractor, noting that long-term use of this technique can cause issues.

However, many other reports have surfaced stating that the woman in the video is a chiropractor herself!

Despite the grey area of actually being certified to tell someone to avoid doing something for their physical wellbeing, it’s definitely worth a try to see if this is actually a more comfortable fit for certain moms out there.

Car seats were officially invented in 1962 and the sole purpose of them were for child safety (and still are). Being a mom is a job in and of itself, so we say try this new method of carrying your child’s car seat, and if it’s not for you, that’s okay! Remembering the original purpose of a car seat and knowing your child is safe might be enough for you.

Be sure to SHARE this article if you thought this baby carrying method was interesting! Check out the full clip below.