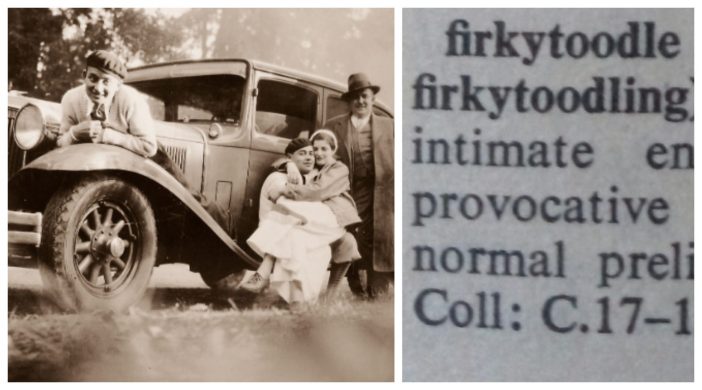 It’s no shocker that back in the day they had a different sense of humor and a much different way of saying things. What was most notable about the 1930s was their slang and other insults of the time period. Journalist @MichaelPDeacon on Twitter came across the Penguin Dictionary of Historical Slang and just had to share the wealth with everyone else.

Some of the hilarious slang included “firkytoodling,” “gay as a goose in a gutter,” and “arse-foot.” People all over the Internet are erupting with laughter and also confusion as to why we ever got rid of these amazing words. Feast your eyes, ladies and gentlemen.

*Warning: Some of the following includes graphic language. Read at your own risk.*

So many beautiful old words and phrases that are ripe for revival pic.twitter.com/XDFz8tnvCo

I’m getting the feeling that “shit” was a popular word back in the day.

“Firkytoodling,” apparently meant to, “indulge in physically intimate endearments, especially in those provocative caresses which constitute the normal preliminaries to sexual congress.” Was the word “intercourse” just not a thing yet?

Apparently a "gammoner" was someone with the ability to con lots of people pic.twitter.com/cawoov2Xin

“Gammoner,” otherwise known as, “one who talks nonsense or humbug; a specious or ulterior deceiver.” So many people pop into my mind when I think of the word “gammoner.” Good one, 1830.

And the favorite “gay as a goose in a gutter” which has the very simple and sweet definition of, “very gay indeed.”

What did you think of all these wild insults and slang from the 1930s? Be sure to SHARE this article if you laughed at any of these!

Previous article: Some Of The Coolest World Records Actually Set By Kids
Next Post: Everyday Items That Were Designed Originally For WWI