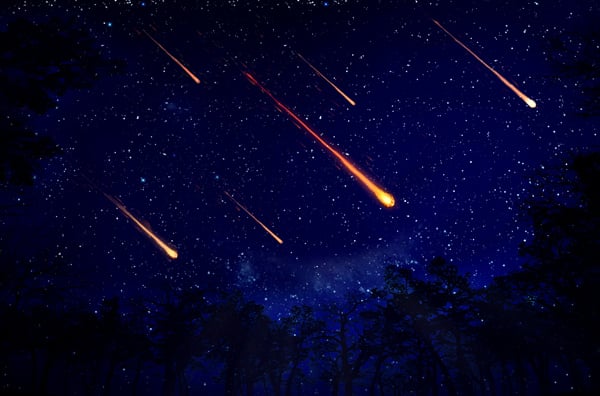 If you’re planning a camping trip or just love to star-gaze on a warm, clear night, you’re in luck. This weekend marks the viewing of the Perseid meteor shower, specifically from August 11th to the 13th. The reason why it’s going to be particularly incredible this year is because the moon will be a thin crescent, making a dark canvas for the meteor’s brightness and potential fireballs.

Bill Cooke, NASA meteor expert, says that each shower should average about 60 to 70 meteors per hour. Typically, a meteor shower can produce up to 200 meteors an hour, so this will be fairly low on average, but still a breathtaking sight nonetheless.

Cooke spoke to Space.com about the meteor shower and shared his thoughts on it. He said, “This is the meteor shower people view most because it occurs in the summer, when the nights are warm and comfortable, when you only have to worry about mosquitoes. The moon is very favorable for the Perseids this year, and that’ll make the Perseids probably the best shower of 2018 for people who want to go out and view it.”

The Perseid meteor shower happens every summer around the same time. It occurs when the Earth passes through a trail of debris left in the orbit of the Comet Swift-Tuttle. The comet passes near Earth every 133 years on its way around the sun. Most of the Perseid meteors are made up of that same debris and they usually burn up completely on the way down, hence why they never actually hit the ground. When they glow particularly brighter than usual, they are referred to as fireballs, something that the Perseid shower is known for.

The best time to view the meteor shower is after 2AM local time. This is when the constellation Perseus is visible in the sky, which is where the Perseids appear to come from. It’s best to watch the meteor shower with binoculars or a telescope and to have as much visibility of the sky as possible. It’s been predicted that this year’s rates are about one meteor per minute.

Be sure to SHARE this article if you’re excited for the meteor shower, and check out a clip of last year’s Perseid shower below!

Previous article: Life 50 Years Ago Compared To Now: Which Is Better?
Next Post: Gal Gadot May Play Actress And Inventor Hedy Lamarr In A New Mini-Series