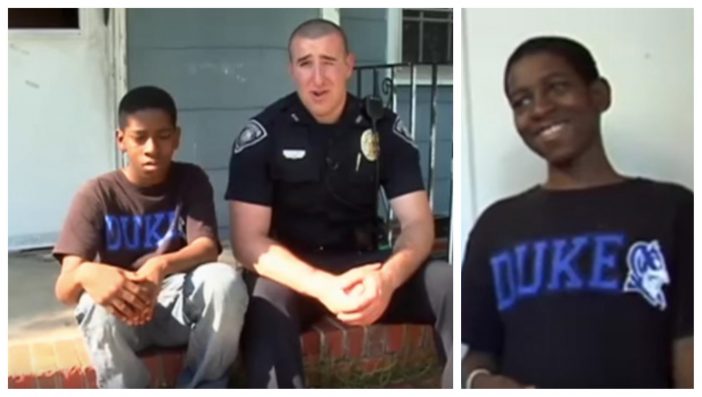 A 13-year-old boy called police one evening and caused an unlikely encounter between himself and a law enforcement officer. Cameron Simmons explained to the cop that he was upset after having a fight with his mom and wanted to run away from home. The police officer tried to talk to Simmons and tell him he has it good, he has a roof over his head, etc. but that he would still try to help out as best as possible.

When the officer brought Simmons home, he realized the 13-year-old was actually lacking all the essential things a boy his age needs. He barely had a bed in his room to sleep on. That’s when officer Acerra decided to personally provide those essential things for Simmons to help give him a better life.

Acerra provided a queen-sized bed, a TV, a desk, a chair, and a complete Wii gaming system. Since then, the two have become an unlikely pair of friends. Acerra has even come over Simmons’ house to play the Wii with him! It was the first time Acerra had seen a smile cross the boy’s face.

When asked about the situation, Acerra responded, “It’s the right thing to do,” followed by, “I didn’t do this for publicity or, you know, to get people to notice me. I did it because I could. I think people should do things like this.”

Many people took to the Internet to praise this officer for going above and beyond his natural call of duty. Everyone just fell in love with this unique pair of friends!

Many were applauding the officer for being an exceptional role model for others.

The story even inspired people to try and go above and beyond for others, even when it is not asked of them.

Some even entertained the idea of the cop having such a huge impact on the boy that maybe he will become a police officer one day.

It’s safe to say that after these genuine act of kindness, this friendship between the two will last a lifetime!

Be sure to SHARE this article if you loved this heartwarming story of unity.

Previous article: Boy Receives Surprise Tickets From His Dad After Finishing Last Chore And Breaks Down In Tears
Next Post: This Is What The Creepy Youth Pastor From ‘Children Of The Corn’ Is Up To Now