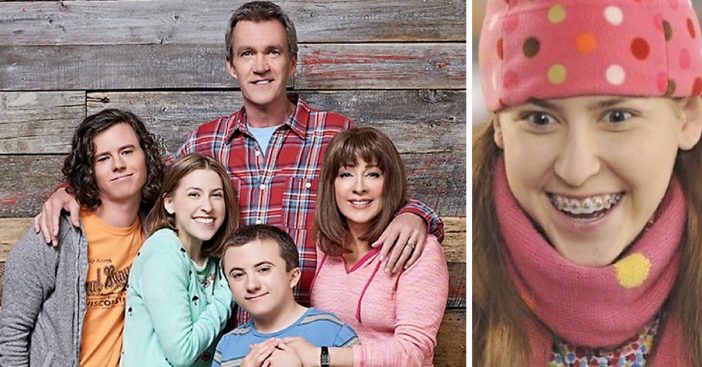 When The Middle on ABC held their series finale this year, fans were sad to see their favorite show end. It went on for nine seasons and remained a popular show on the network. After the show ended, rumors flew that there would be a spinoff about Sue Heck, the loveable sister of the family.

Eden Sher, who played Sue Heck, recently confirmed that the rumors were true. She confirmed the rumors in an interview at San Diego Comic-Con. Eden said that she was shooting a pilot for a spinoff. However, nothing is set in stone and the script is not complete.

She has high hopes though and hopes the show gets picked up. She said she loves playing Sue Heck and isn’t ready to be done with the character. She also revealed a few things about the spinoff.

The timeline will fall sometime between the end of The Middle and a little bit of a fast forward of Sue’s life. In The Middle finale, they show a look into the future for the Hecks.

Axl has three boys who are just like him. Brick is a successful author. Sue gets married to Sean, her on-again-off-again boyfriend. The show ends with Frankie saying “For all the things we didn’t have, we sure had a lot.” They drive off into the sunset in true series finale form. Did you enjoy the finale?

Eden revealed that in the spinoff she wouldn’t be married yet and would be just graduating college. There is no news yet on when the show might air or the title of the show. She did say that it would be great to air it after the Roseanne spinoff. We wonder how much of the spinoff will show the lives of the other Heck family members.

What do you think about shows having spinoffs? Do you enjoy them or wish they would just end with a great series finale? Would you watch The Middle spinoff about Sue Heck? We will share new updates on the show as we hear about them.

If you liked this article, please SHARE with a friend who loves The Middle and Sue Heck!

Previous article: April The Giraffe Is Pregnant Again And We Are So Excited!
Next Post: How The Sun Affects Your Body In Other Ways Besides Sunburn