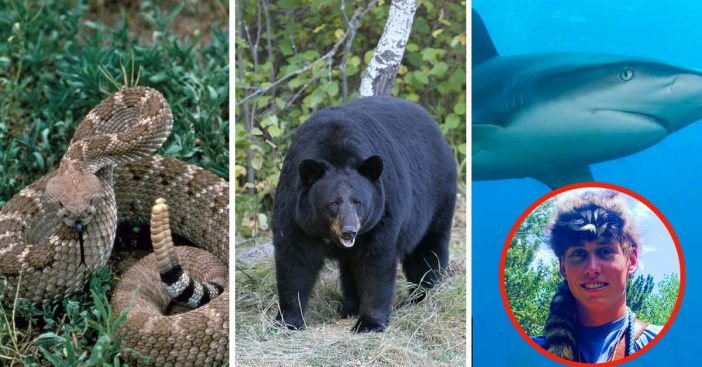 Dylan McWilliams from Colorado is now called the unluckiest guy alive at only 20 years old. In four years, he has been bitten by three of the worlds most dangerous animals. These animals include a bear, a shark, and a rattlesnake.

Dylan is a survival expert and spends a lot of time outdoors in nature. In 2015, on a trip to Utah, he was bitten by a rattlesnake hiking in a canyon.

Lucky for Dylan, he was only sick for a few days because the snake didn’t release much venom. However, his odds of being bitten by a rattlesnake were 1 in 37,500. Unfortunately, things got worse.

Then in 2017, he was backpacking across the United States and Canada and was staying in Colorado. While he was sleeping, a black bear approached his campsite and put Dylan’s head in its mouth! He punched at the bear and poked its eye and was able to get loose. It took nine staples to repair the bite to his head. Ouch!

The odds of being attacked by a bear is one in 2.1 million. It seems as though Dylan is either very unlucky or very lucky to survive these attacks.

You would think this would curb Dylan’s interest in nature. However, a year later in 2018, he was in Hawaii when he was bitten by a shark! He started kicking and hit the shark at least once before swimming very quickly to shore. He got seven stitches to repair the bite mark. The odds of being bitten by a shark are one in 11.5 million.

Despite these unbelievable stories, he still loves nature and will continue to spend most of his time outdoors. He says he still goes hiking, catches rattlesnakes and swims in the ocean. What a brave guy!

Can you believe this story? If you found it interesting, please SHARE with a friend!