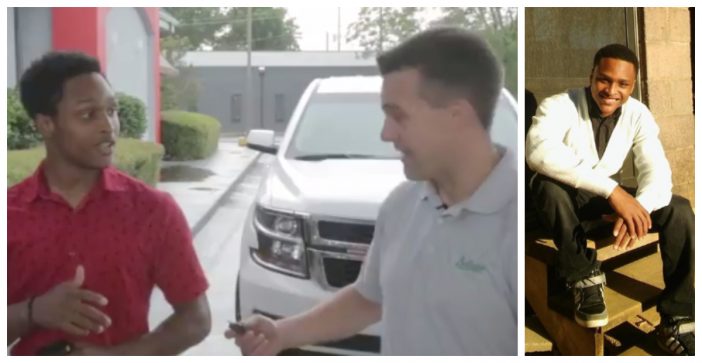 An Alabama resident named Walter Carr just received a car from the founder/CEO of his company after walking nearly 20 miles to work. According to Carr, the night before a work day his car broke down. Instead of calling out, he started on the journey to his job at midnight to be there on time. His dedication did not go unnoticed.

Carr works for Bellhops, a company that helps families move. And Carr wasn’t about to let down a family that was counting on him. So he did the unexpected.

Pelham Police spotted Carr at least 14 miles into his journey and picked him up to treat him to breakfast. After law enforcement had learned that his car broke down the night before and he was walking since midnight, they gave him a ride to his job. Upon arrival to his job, the officers met the family whom Carr was to be helping, one of them being Jenny Lamey.

Jenny could not be more grateful for Carr and the determination he had for his job and helping others. She said, “In the wee hours of Friday morning, July 13th, Walter walked 20 Miles. To help my family move. Well, that 20 Mile walk brought him way further than Pelham, Alabama. That walk Walter made has brought him into the hearts and homes and businesses of thousands of Americans all across the country.

We are all talking about him and sharing his story with our children. He gives us hope and courage and renews our faith in the resiliency of the human spirit. He is a role model, an example of impeccable character, humility, grit, determination, faith and work ethic.”

We've all seen the amazing story shared by Jenny about one of our bellhops, Walter Carr, but many have asked if we have any video from the moment CEO @LukeMarklin thanked Walter for the perseverance he demonstrated on his first day w/ @BellhopsMoving #TheWorldNeedsMoreWalters pic.twitter.com/mXrvI2JQoP

CEO Luke Marklin gifted Carr his 2014 Ford Escape for his outstanding work ethic and inspiring journey to work. Carr was absolutely dumbfounded and incredibly humbled by the gift.

People on the Internet are absolutely loving this story and praising the CEO for his recognition of Carr for his hard work.

Mr. Marklin, I think your response to this young mans behavior is perfect. Walter is the kind of employee everyone wants and you got him. Walter will go far in life! And how cool that the police took him to breakfast!!! Goodness still exists!!

Some even expressed their sympathy for Carr’s trek to his new job.

After reading about Walter Carr's 20 mile trek through the night to make the first day on his physically demanding new job I am never going to complain about my commute again!

Be sure to SHARE this heartwarming story with your friends!