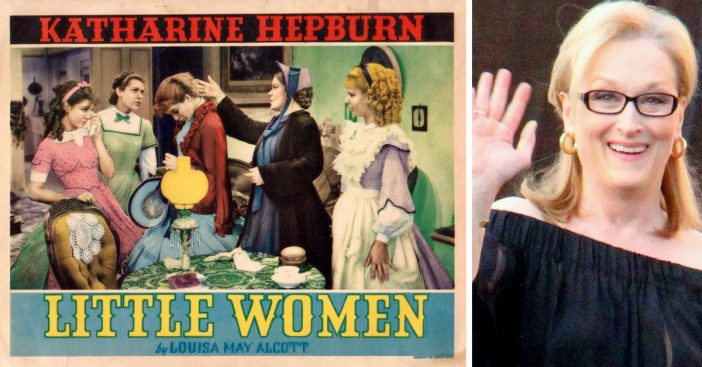 Do you remember reading the book Little Women? It is a classic book from 1869 by Louisa May Alcott. Over the years, it has been adapted into movies and TV shows. There will be a new adaptation of the famous book in 2019, this time starring Meryl Streep.

Meryl Streep reportedly got to pick any role she wanted in the film. She chose Josephine March. She is the sisters’ rich aunt. This character hasn’t been one with a huge role in the previous films, but this one is said to be a little different. It will focus on the March sisters after they leave home and will likely move back and forth in time.

Rumors are that the movie will also star Saoirse Ronan, Timothee Chalamet, Emma Stone, and Florence Pugh. Greta Gerwig will direct the movie.

The last Little Women movie was made in 1994. It starred Winona Ryder, Kirsten Dunst, Claire Danes, Christian Bale, and Susan Sarandon. There is another adaptation that will be released this year, but this year’s version of Little Women is a more modern retelling starring Lea Thompson, Sarah Davenport, and Lucas Grabeel. Yet another recent adaptation was a mini-series in 2017 on PBS.

The first book-turned-movie classics were released in 1933 and 1949. The first version starred Katharine Hepburn. Do you love the classics or do you get excited for a new take on a beloved book?

The new movie starring Meryl Streep is said to be released around October 2019. They expect to start filming this October and finish up in a year.

Do you love the book Little Women or the movies? Are you excited to see the new one this year or next year? What do you think about the casting?

If you enjoyed this article, please SHARE with a friend who loves Little Women or Meryl Streep!