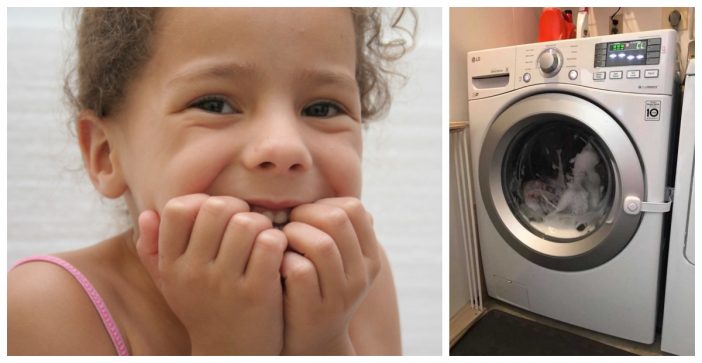 A Colorado mother by the name of Lindsey McIver just endured the shock of her life when she realized her 3-year-old daughter was locked inside of a tumbling washing machine. She took to the Internet to share her story in hopes of keeping moms and dads aware of the dangers of front-facing washing machines.

“We were woken up by our 4-year-old son who was crying so hard he could barely talk. As I was trying to understand what he was saying, my husband flew out of bed and down the stairs. It was then that the realization hit. He had said: Kloe. Inside. Washer,” she says in the post.

However, that night/early the next morning is when trouble ensued. The machine was tumbling and filling with water with 3-year-old Kloe inside. She was screaming, but the machine was so air-tight you could not hear her. She was perfectly fine aside from some bumps on her head and wet clothes.

Upon the aftermath of the incident, Lindsay discovered that there was indeed a child lock option with the washer. They claimed they hadn’t used the machine yet, so they weren’t aware of these settings. However, the child lock feature will not allow the machine to start but does not fully lock the door, which is an important factor that Lindsay stresses.

Several fellow moms took to the post to express their sympathy for the situation.

Be sure to always be on the lookout for potential appliance dangers and your children. Make sure to SHARE this article to spread awareness!