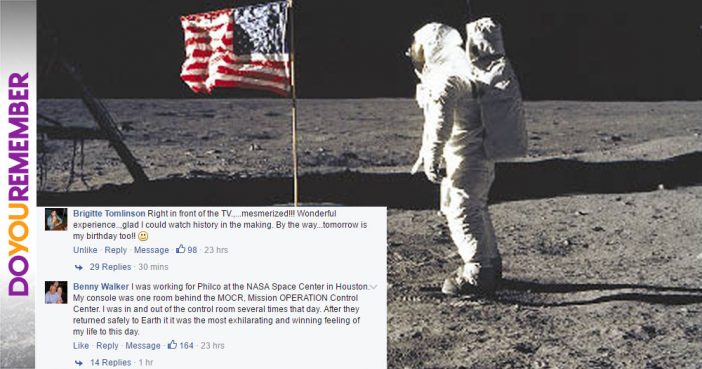 Today is Neil Armstrong’s birthday. Do you remember what you were doing on the day of the moon landing? Some people believe it never really happened. Why do you think they feel this way? How did the moon landing make you feel as an American?

Thanks and Thanks for the Memories.

Sharon A. Mcleod I was at my home with my family watching this mission with Neil Armstrong landing on the moon. What a honor of seeing the first man stepping feet on the moon. History made.

Elizabeth Kienitz It was my ? birthday. I was watching the ? television focused on the lunar landing.I considered this to be home a birthday present.

Diane Klassen It was my uncle’s 50th birthday and we were on our way to go camping in Canada! Listen to everything on the radio!

Jimmy Rabon I was just getting my 35 year career started with Pepsi Cola Bottling Company and remember it like it was yesterday-now l can’t remember what happened yesterday..Lol!!

Mark Walton Watching on TV with my family. I was 14, my youngest sister was 5. My dad had his camera set up on a tripod, trying to get a shot of both the real moon and the one on TV. We still have it in our slide collection

Betty Ann Jones Trivits I remember very well! We were camping in New York State but stopped to spend the night in a motel so we could see the landing.

Anita Kassner Manley It was pretty exciting! I was very pregnant with my son. He splashed down on July 24, the same day the astronauts splashed down.

Lynette White I was 18 months old, but I remember when it got dark that evening my dad holding me and pointing at the bright moon and telling me that there were astronauts walking on it and that they were coming home in a rocket.

Loretta Shane Sawyer My mom had chips and coke and cookies all set out in the living room around the TV and 3-4 kids from the neighborhood and myself were sitting on the floor glueD to the TV. I remember that it was in the wee hours of the morning and after he walked we all ran outside and Looked up at the moon. We had fun laughing that now there was really a man on the moon

Ken Leigh My mom let me stay up late to watch this. I remember her saying “you are seeing history in the making”. In my childhood we had a united country going to the moon, today we have memorized hoards of people chasing imaginary pokemons…sigh..

Anita Weigel Manis I was babysitting! The kids were asleep. I was just sitting on the couch watching in amazement at what was going on in my life time! I was wondering what all they would do before my life was over. Wondering what everyone else was believing as they watched this! Knowing that some believed it was TV Magic.

Gloria Miller No tv. Read in newspaper. I thought how wonderful and miraculous it was. I never doubted it. Just wish there’d been more moon landings.

Steven Hunt We were sent home from the swimming pool on Burlington, KS. So we could watch the landing. Remember it to this day. Grainy black and white. Good memory

Ruth Hinerman we were coming home from Fla where we took our 4 kids to watch the takeoff to the moon, it was exciting, we had the car radio on , when we heard that they had landed on the moon

Gary Mammen The moon landing was one of the only times the hole world stood together. We watched and were amazed. For just a few moments we were one race, one people, we were human.

Rose Allred My dear dad passed away in January that year and I remember thinking how I wished he was here to see the moon landing. I never thought I would see that in my life time.

Brian Thompson I’m a Brit! I was six years and three months old. I was gotten out of bed by my Dad to watch this historic event, 42 years later I was very fortunate to be on the cape at Kennedy, on one of the final buses through the gate before they were closed for the landing of Atlantis. I was very proud and emotional to be part of your American mom.

Wayne S. Vaughn It was 2am, and we were all on front of the tv! I thought, “we beat the Russians! ” I was a proud American!

David Wolk I was 14, watching it on the big screen with a few hundred other students in 1969. To this day, it was one of the most amazing things I’ve ever experienced in my life.

Mary Bir Tom was stationed in Long Beach, Ca and we were waiting the birth of our first daughter two and a half months later. What better time to bring a child into this world than to say many years later, “You were born in the year we sent a man to the moon and he walked on it.”.

Ernie Latwaitis was watching it live on TV with champagne at the ready. proud moment for sure. do they even teach this in schools today. I grew up during the space race and loved every minute, every launch and every accomplishment

Margaret Lewis I remember it well ! I was 9 months pregnant with my son, we were hoping he would be born on the day of the moon walk but he decided to be late and was born 6th August !

Ira Hartman i was watching the moon landing on tv.i think it was real.they planted the american flag and it didn’t move.that’s because there is no wind and no atmosphere on the moon.

Tonda Valladares It was the day after my 5th birthday, we all watched it on my grandmothers TV. And then my mom took us outside to wave to the man in the moon.

Cherry Coffrin I was 16 and we were all in font of the TV. Mom and Dad had guests. A fighter pilot buddy and his family from Cali..it was so hot, close to 100 that day, but, we had central air..we all cried..marvelous, so glad I got to see it live on TV..people that don’t believe must be very uneducated or just stupid…

Todd Steenbergen My parents and aunt were watching the big event unfold on TV, while I played with a balloon. I was 4 years old, and for some reason, that balloon popped when his foot hit the moon. My family thought the moon exploded!