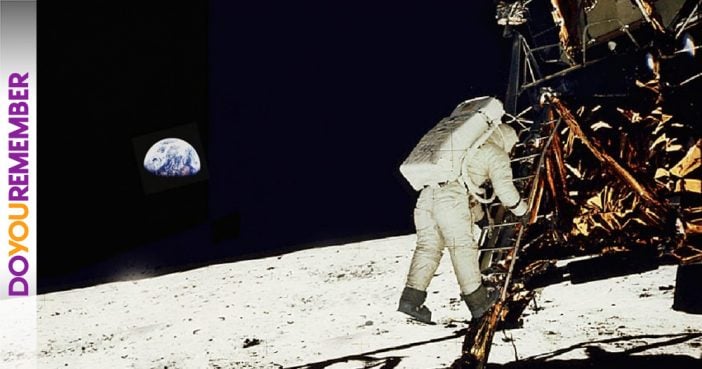 In April 1961, the United States suffered an embarrassing loss to the Russians in the ever tightening Space Race when cosmonaut Yuri Gagarin became the first man to orbit the earth. One month later, President John Kennedy called a special joint session of Congress to challenge the nation to commit itself to achieving the goal, before this decade is out, of landing a man on the moon and returning him safely to the earth

In a little more than eight years, Kennedy’s ambition would be realized: On July 20th, 1969, the Lunar Module of the Apollo 11 spaceflight landed on the moon, and the next day, astronauts Neil Armstrong and Buzz Aldrin set foot upon its rocky surface. Today, in honor of Mr. Armstongs birthday, we present little-known facts about the Apollo 11 moon landing.

1. The crew originally wanted to call their vessels Charlie Brown and Snoopy, but the bureaucrats in charge thought that would undermine the gravity of the mission. Snowcone and Haystack became the working names, before the more august Columbia and Eagle were decided upon as the final choices.

2. Command Module pilot Michael Collins, the third member of the crew, designed the insignia of an eagle clutching an olive branch. The branch was moved from its beak to its claws because the talons were originally deemed too warlike. In addition, the Arabic version of 11 was used over the Roman XI, for fear the latter would not be understood by some countries.

3. Armstrong carried on board a piece of wood from the 1903 airplane crafted by the Wright brothers, as well as a diamond-studded pin in honor of the deceased astronauts of the doomed 1967 Apollo 1 mission.

4. After landing, Aldrin took communion on the moon. Because of a current lawsuit against NASA filed by the atheist Madalyn Murray O’ Hair, who objected to religious services being a part of a government project, Aldrin did not publicly reveal his action.

5. The first pictures of Armstrong and Aldrin setting foot on the moon were transmitted in slow-scan television, a radio-wave format incompatible with commercial broadcasting. Therefore, a conventional camera viewed these images and sent them over the airwaves to an audience of 600 million. Due to a clerical error at NASA, the original images were erased in the early 1980s.

6. Because the moon is airless, a special American flag was designed with an additional horizontal pole to support the cloth and make it appear as if it was flying.

7. President Richard Nixon had originally ordered a long speech to be written for him to deliver during his radio-telephone transmission to the astronauts, but was dissuaded from making lengthy comments by NASA liaison Frank Borman, who felt the mission should be rightfully credited to President Kennedy.

8. In covering the landing live, CBS anchor Walter Cronkite was not only overjoyed to deliver such good news in a troubled time, but was also famously at a loss for words, rubbing his hands gleefully and saying only, Wheboy. In recognition of his continued enthusiastic coverage of America’s space program, NASA presented him with an Ambassador of Exploration Award in 2006; he was the only non-astronaut or non NASA employee to receive one.

9. In the wake of Watergate and the public’s distrust of government, a 1974 book, We Never Went to the Moon, began to foment suspicion that the entire landing was a hoax, created to give the illusion of victory over Russia. Elements of this conspiracy theory gained in popularity as the decade wore on, with one faction believing the event was staged by Disney, or was directed on a soundstage by Stanley Kubrick, renowned for his film 2001: A Space Odyssey.

10. In March 2012, Amazon founder Jeff Bezos organized a team that, through sonar scanning, located the F-1 engines that launched Apollo 11 into space. They had been submerged in the Atlantic Ocean for more than 40 years. Of the five located, one was brought to the surface.

Previous article: Remembering Marilyn Monroe
Next Post: DoYouRemember What You Were Doing the day of the Moon Landing?