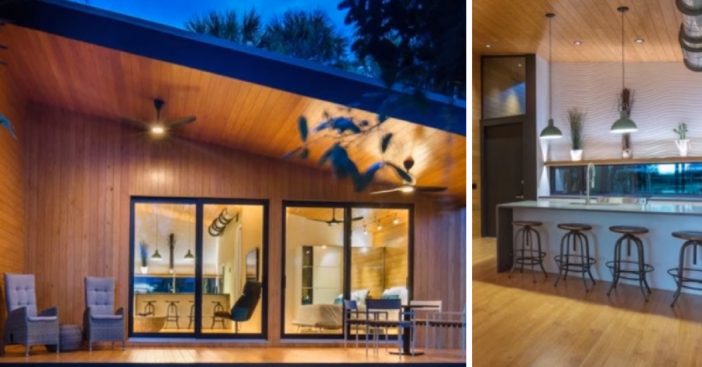 When Josh Wynne’s father started aging and needed more help, Josh had the idea to build him a tiny home. He wanted a home that his father could navigate around it easily and wouldn’t require much upkeep. This would allow him to still live on his own.

Josh calls it “Mike’s Hammock” after his father Mike. He built the tiny home on his property in Florida so he could keep his dad close by. The home is slightly larger than most tiny homes at 604 sq. ft. It has one bedroom, one bathroom and a very chic kitchen and living room area.

Josh used many different environmentally friendly products when building the tiny home because he also wanted it to be sustainable. He used many local and recycled products including the frame of the house, which he sourced from a construction site. He also built the home carefully to keep the energy costs low for his father. The bills are around $25 a month.

He also styled it beautifully, with lots of large windows and open lighting. This is so his father can sit and watch the wildlife nearby and it also gives the illusion of more space.

Josh also worked hard to accommodate his father Mike’s health issues, including limited mobility. The space is well equipped to handle wheelchairs and walkers. The shower has a fold-down seat and a grab bar. The cabinets are all accessible from lower angles.

Overall, during construction, the tiny home only produced less than a dumpster full of waste. Josh even made sure to plant three trees for every tree material he had to use on the house. What a great guy!

Would you ever consider building a tiny home for your aging parents on your lot? Or would you live in a tiny home your children built for you? This seems like such a great idea!

Previous article: Royal Protocol Was Broken Again, This Time By Princesses Beatrice And Eugenie
Next Post: 5 Things You Should Always Buy Second Hand Instead Of Brand New