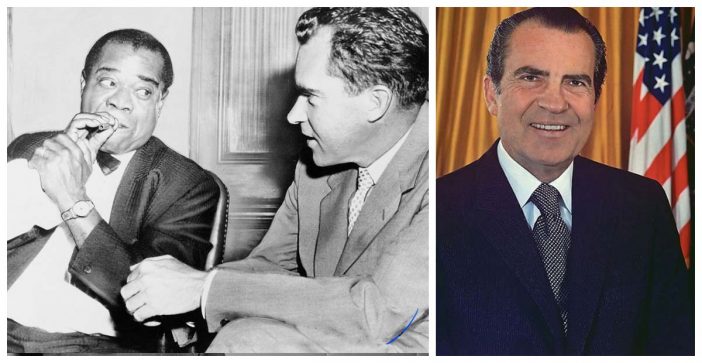 Would you have ever thought that Vice President Richard Nixon and the legendary trumpeter Louis Armstrong would have ever crossed paths? They most certainly did, and apparently Nixon was actually a huge fan of Armstrong.

Sometime in the early 1950s, the two crossed paths at an airport and Nixon offered to help carry some of Armstrong’s heavier luggage. Little did Nixon know that Armstrong would have him carrying the case containing his stash of marijuana.

Armstrong was essentially a lifelong smoker, and especially loved his marijuana. Of course, security back then was not as cracked down on drugs as they are now, so the case went through just fine. There also seemed to be a follow-up story concerning his wife, Lucille, and his stash of drugs.

Shortly after the Nixon drug mule story, Armstrong’s wife Lucille was busted for possession of marijuana. He had returned from Japan and was spending time at a hotel in Waikiki when police busted through the door and searched the room.

They found what was most certainly Armstrong’s stash and Lucille was off to jail. She was eventually released and had to pay a $200 fine.

After Lucille’s release from jail, Armstrong wrote a strongly-worded letter to his manager about the arrest. It said:

“Mr. Glaser, you must see to it that I have special permission to smoke all the reefers that I want to when I want or I will just have to put this horn down, that’s all, I can gladly vouch for a nice, fat stick of gage, which relaxes my nerves, if I have any … I can’t afford to be … tense, fearing that any minute I’m going to be arrested, brought to jail for a silly little minor thing like marijuana.”…

“Can you imagine anyone giving Lucille all of those headaches and grief over a mere small pittance such as gage, something that grows out in the backyard among the chickens and so forth,” Louis emoted in his letter to Glaser. “I just won’t carry on with such fear over nothing and I don’t intend to ever stop smoking it, not as long as it grows. And there is no one on this earth that can ever stop it all from growing. No one but Jesus – and he wouldn’t dare. Because he feels the same way that I do about it…. Gage ain’t nothin’ but medicine.”

What do you think about these wild marijuana stories? Be sure to SHARE this article if they surprised you!