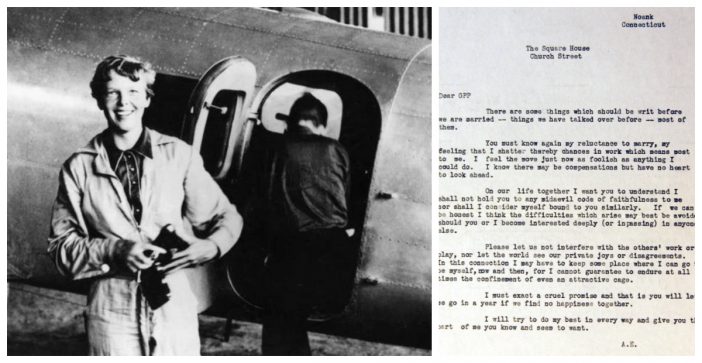 Amelia Earhart is easily one of the most well-known females in history. She was a female aviator and author. In 1937, at the age 39, Amelia disappeared over the central Pacific Ocean with passenger Fred Noonan. Fascination over Amelia’s disappearance still occurs to this day, although in 1939 she was “declared dead in absentia” despite any real evidence she still may be alive.

In 1931, Amelia apparently wrote a prenuptial letter to her then-fiance, George Putnam. It seems as though the contents of the letter itself have very little sentiment towards George. Yikes!

Amelia’s letter weighs a great deal on the limitations that marriage might bring to her career. She says, “You must know again my reluctance to marry, my feeling that I shatter thereby chances in work which means most to me.”

Later in the letter, she follows up with, “I must exact a cruel promise and that is you will let me go in a year if we find no happiness together.”

The most surprising part about the letter that even had some on the Internet gasping (and applauding) was, “On our life together I want you to understand I shall not hold you to any midaevil code of faithfulness to me nor shall I consider myself bound to you similarly.”

Many wonder why she would even get married at all if she felt this way. But we’ve got to give it to her for being honest and blunt from the get-go! She was a woman who was surely way ahead of her time.

What did you think of this shocking prenuptial letter? Be sure to SHARE this with your friends if it surprised you!

Previous article: How To Get Rid Of Ants In Your Home Without Calling An Exterminator
Next Post: 5 Tips On How To Protect Yourself From Ticks This Summer