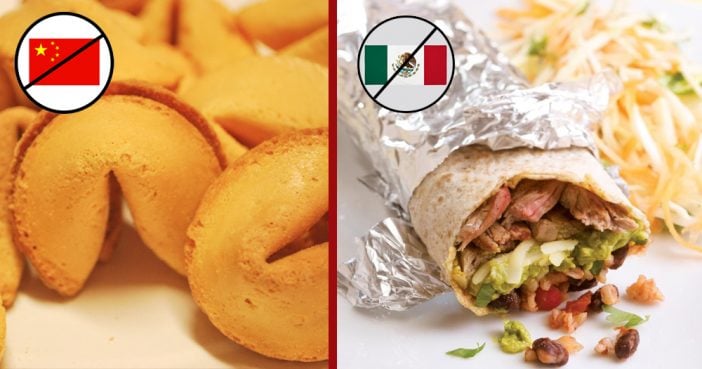 There are some foods that seem like they are from a different country but they were actually first created in America. Weird, right? Here is a list of some foods that may surprise you because they were first cooked up in the United States. Hint: your Chinese takeout may be more American than you think.

Fortune cookies may come with your Chinese food, but they aren’t from China! They were actually made in California in 1914. They were founded by someone from Japan.

You think of garlic bread being served with a nice Italian meal, but it was actually first made in Michigan. Cole’s Breads sold the first frozen garlic bread in 1970, but rumors are it started in World War II when soldiers requested toast with garlic and margarine.

Chimichangas are a classic Mexican food, right? They were actually first made in Arizona when a burrito accidentally got into some frying oil. Apparently, the chef who made this “mistake” blurted out “chimichanga” and the name stuck.

Russian dressing is only named this because it contains caviar, a popular ingredient in Russia. It was actually a grocer in New Hampshire who cooked up this popular salad dressing.

This popular sandwich is actually from Florida. They were started as a cheap lunch for Cuban immigrants working in Florida in the 1800s, but were so good it has become a staple on most restaurant menus today.

Which item on this list surprised you? Which one is your favorite to eat? If you enjoyed this article, please SHARE it with a friend who loves food!

Previous article: 7 Vintage Swimsuits That Are Making A Comeback In 2018
Next Post: Unnerving Postcard From Titanic Maid Goes Up At Auction For Almost $26,000