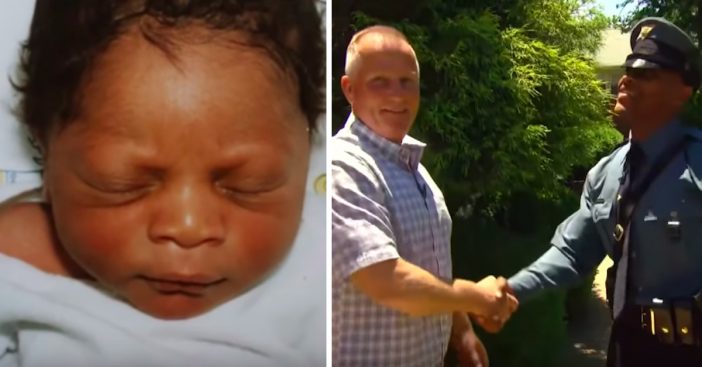 A heartwarming story started with a simple traffic stop. A New Jersey Trooper named Michael Patterson pulled over a car and soon realized the man was a retired police officer named Matthew Bailly.

The two began reminiscing and you won’t believe what they found out about each other. I’ll give you a hint, the story ends with lifelong friends and no traffic violations.

As the two began talking, Bailly couldn’t help but remember Poe Place, where Patterson said he was from. He recalled delivering a baby on that street in 1991. Turns out that retired officer Matthew Bailly helped deliver now State Trooper Michael Patterson 27 years ago.

The story goes that Bailly was called to Piscataway, New Jersey to help a woman who suddenly went into labor. Bailly was on the scene and listening to instructions from a doctor, helped to deliver the baby boy.

After Bailly started describing the home and the story to Patterson, he knew it was the same police officer that delivered him. He couldn’t believe it. The two were shocked that fate put them in the same place at the same time once again.

Patterson said that his mother tells him this story on his birthday once a year and that she is so grateful for Bailly’s help that day.

They met up and Bailly got to talk to Patterson’s mother. He also realized that Patterson’s wife is currently pregnant, so he gave her a special gift. What a thoughtful gesture!

Check out the video to see this heartwarming story for yourself and learn if the two will keep in touch.

Did you enjoy this story and video? What are the chances of the two running into each other like that?

If you truly enjoyed this story, please pass along to a friend!

Previous article: Princess Margaret’s Handsome Grandsons Are All Grown Up And Looking Dapper
Next Post: 5 Reasons Purchasing An Apron Will Completely Change Your Lifestyle