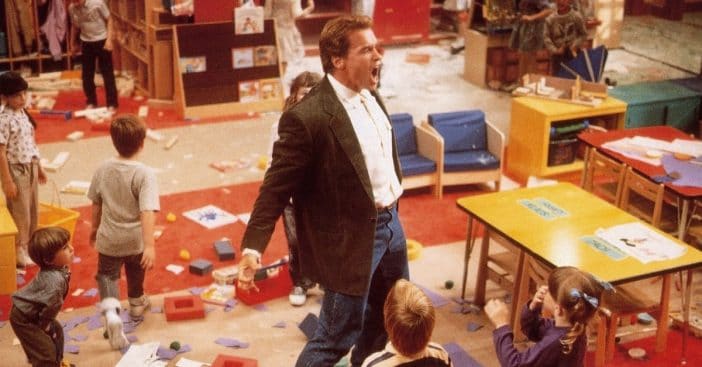 Can you believe that Kindergarten Cop came out 30 years ago? The laugh out loud comedy starred Arnold Schwarzenegger as an undercover cop who had to pose as a kindergarten teacher. It might be hard to believe that all of the cute kids in that movie are now all grown up. Yahoo Entertainment held a virtual reunion for the actors and they were shocked when Arnold popped in to say hello.

The film came out in 1990 and it was just a few months after Arnold and his ex-wife Maria Shriver had their daughter Katherine Schwarzenegger. He admitted that it was a warm-up for having his own kids to be around those kids all day long. He said, “By hanging out with you guys between the breaks and talking to you guys and all that, this movie really helped me become a better parent myself. It really helped me raise my kids.”

Arnold told all of his former co-stars that he wants to have an in-person reunion once the pandemic is over. He said, “We’ll have it at my house, we’ll get together and have a party and get the gossip going! I want all the details about how you got here from 30 years ago. I’m proud of all of you, so keep up the good work.”

Before Arnold surprised the cast during the virtual reunion, the actors shared fun stories from the set. They remembered being a little afraid of Arnold off the set too. One of the stars said, “We had these little shorts that wardrobe put under us, and we were lifting our skirts in between takes joking around with the boys. Arnold did not like that! He looked at me, and we stopped!”

If you’re in the mood to watch Kindergarten Cop, you can stream it on Hulu and Starz. If you want to watch the entire virtual reunion, watch it below: