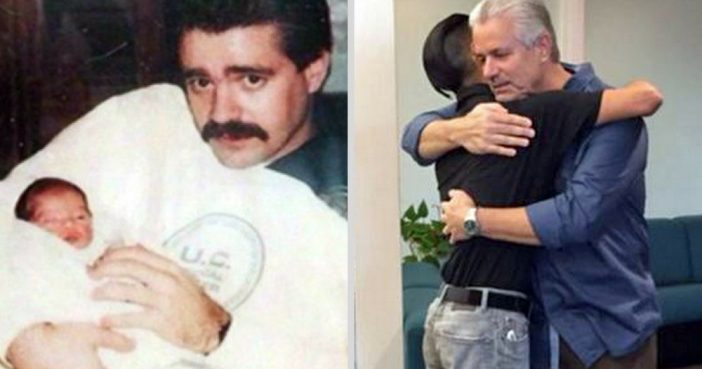 A newborn baby who was found alive after being abandoned by his mother behind a trash dumpster has been reunited with the police officer who rescued him.

On Nov. 21, 1989, Santa Ana, California police officer Michael Buelna was investigating an unrelated crime when he heard a newborn’s cry from a place no newborn should ever be.

Officer Michael Buelna was a young cop on duty in Santa Ana The night was unusually chilly for California weather. Buelna was investigating a stabbing that had taken place in the area a few days prior. As he rounded the next corner, he was flagged down by a few neighbors in the area. They’d heard a baby crying.

Buelna went around to investigate the reports of a crying baby. When he approached the dumpster he heard what sound like a very low meow, like the sound of a cat softly mewling. He moved some of the trash out of the way and found the tiny baby, moaning hoarsely amongst the garbage. The baby was alive but very weak…

The officer noticed that the baby’s umbilical cord was still attached. Not only that, but he was covered in a thin, slimy substance, almost like mucous. Bits of trash and gravel were sticking to his pale skin. He gently picked up the child and cradled him in his arms. His breathing was faint so Buelna tried to give him a little bit of breath.

The cold, filthy infant reacted to the officer’s breath. He was alive and well, but he needed medical attention badly. Upon seeing how malnourished and frail the infant was, Buelna rushed him to a nearby hospital. Paramedics were able to work on the baby and save his life. On the way to the hospital, Buelna decided to give the foundling a name: Adam, seemed appropriate…

Page Page 1 of 5
Previous article: 20 Hilariously Awkward Family Photos That Will Make You Cringe.
Next Post: 15 Kids Who Are Pretty Much Exact Clones Of Their Parents