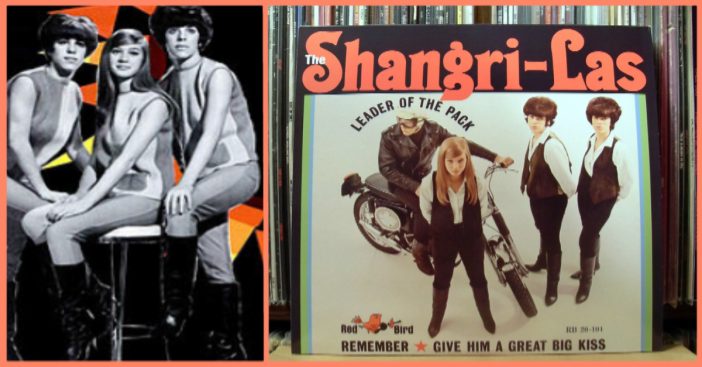 This is a tale of young love, parental disapproval and death by motorbike. Mary Weiss, the lead vocalist of the Shangri-Las, said in Telegraph magazine, April 14, 2007, “I don’t think I would be able to put feeling into the song unless I had really thought about the lyrics. I put a lot of my own pain into that song. I don’t think teenage years are all that rosy for a lot of people-they certainly weren’t for me. They are the most confusing time of people’s lives and there is a tremendous dark side to the record, which I think teenagers related to. The studio was a great place to let the pain out.”

She went on to comment: “I thought it was amusing when they (British radio and TV stations) banned Leader because of the mod and rocker stuff. When I got off the plane in my leather jacket everyone knew which side I was on.”

“Leader of the Pack” by The Shangri-Las

Mm–“Is she really going out with him?
“Well, there she is, Let’s ask her”
“Betty, is that Jimmy’s ring you’re wearing?”
“Mm-hm”
“Gee, it must be great riding with him”
“Is he picking you up after school today?”
“Mm-mm”
“By the way, where did you meet him?”

“I met him at the candy store
He turned around and smiled at me
You get the picture
“Yes, we see”
That’s when I fell for the leader of the pack

One day my dad said find someone new
I had to tell my Jimmy we’re through
He stood there and asked me why, but all I could do was cry
I’m sorry I hurt you, the leader of the pack

I felt so helpless, what could I do
Remembering all the things we’d been through?
In school they all stop and stare
I can’t hide the tears, but I don’t care
I’ll never forget him, the leader of the pack