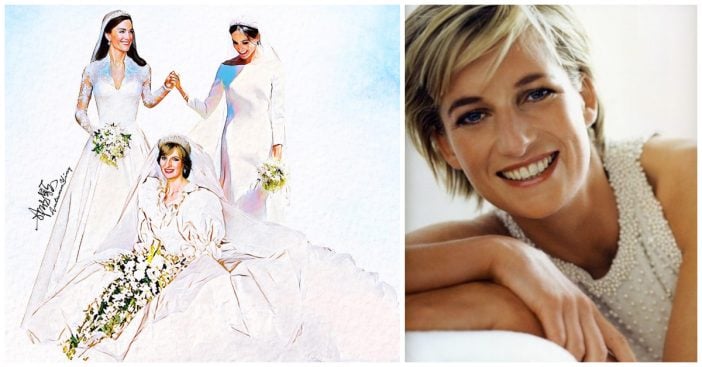 The recent Royal Wedding of Meghan Markle and Prince Harry was stunning. However, one thing was missing: Prince Harry’s mother Princess Diana. Her tragic death many years ago was still on everyone’s mind as Harry tied the knot with his new bride. She was also missed at Prince William’s wedding to Kate Middleton in 2011.

One artist named Autumn Ying decided to create a series of drawings of the royals, including a stunning drawing of Princess Diana, Meghan Markle, and Kate Middleton all in their wedding dresses. She posted several drawings on Instagram.

Autumn says she uses watercolor paints, colored pencils, and shimmering paint. She also touches up the drawings digitally before posting them on Instagram.

In one of the drawings of the three women, she writes in the caption, “I’ve always found that home is simply a matter carrying it with you. While Princess Diana won’t get to see both her daughters-in-law, in reality, I’m thinking of visualizing this scene as a touching tribute to the late mother of Prince William and Prince Harry.”

If only all three of these amazing ladies could have met.

We tragically lost Princess Diana in 1997. However, in both William and Harry’s weddings, there were touches of Diana during the day.

For example, Meghan’s bouquet included Princess Diana’s favorite flower, white garden roses, straight from the private garden at Kensington Palace. Meghan also wore a ring to the reception that once belonged to the late princess.

Autumn also posted several pieces of Princess Diana and her boys, Diana by herself, and Meghan and Harry. We think they are absolutely beautiful and well done.

What do you think of these drawings? Do they make you feel nostalgic? Which one is your favorite? Let us know by commenting below.