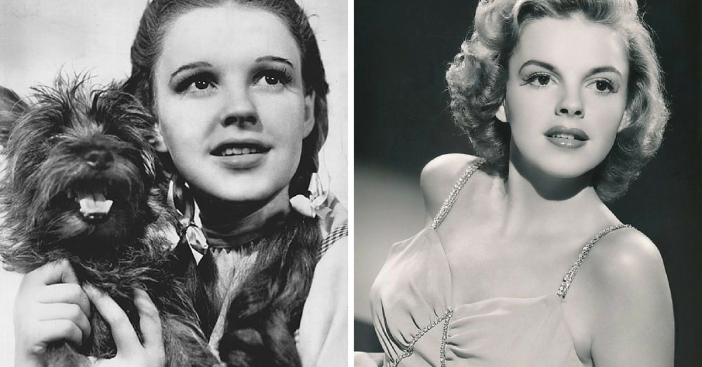 Judy Garland was an iconic actress and performer. Most people know her from her famous role as Dorothy in The Wizard of Oz, but may not know much about her life.

Here are some little-known secrets from Judy Garland’s life!

When she was young she toured with her sisters Mary Jane and Dorothy Virginia as dancers called The Gumm Sisters. They were often referred to as the Garland Sisters as well after being told the trio looked prettier than a garland of flowers.

She later changed her name to Judy, inspired by a popular Hoagy Carmichael song.

2. She was afraid of thunder

It is said she was terrified of thunder. We wonder how she did in those storm scenes in The Wizard of Oz.

She was also known to be superstitious and claimed that she learned better when she wasn’t wearing a left shoe. She was often seen in school with only her left shoe off.

3. She had a history of nervous breakdowns

In the ’50s, she was dropped from MGM due to erratic behavior. After becoming a star, Judy developed a dependence on barbiturates and amphetamines. In fact, her death was said to be an accidental overdose from drug use.

During her short life, she was married five times and had three children. All of her children, Liza Minelli, and Joey and Lorna Luft, followed in her footsteps and started a career in the performing arts.

5. She was only 16-years-old when she played Dorothy

Since she was still in school, she was only allowed to work four hours a day. She had to attend school for three hours and needed at least an hour of free time. In her free time, she enjoyed playing sports such as baseball and swimming.

She also loved the dog who played Toto. He was said to have followed her around constantly, even when they weren’t filming.

RELATED: How Much Actors’ Earned Playing In ‘The Wizard Of Oz’

Do you love and miss the iconic Judy Garland? If you enjoyed reading this article, please send to a friend!

Check out some Judy Garland Highlights below!

She had the most beautiful voice…