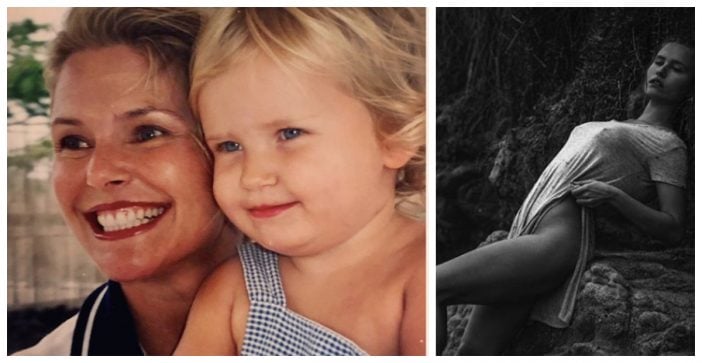 It’s not too often you hear about the children of our favorite public figures and what they’re up to. Many of them choose to stay out of the spotlight, while others excel in the same line of work that their parents did. That is certainly the case for Ms. Sailor Lee Brinkley Cook, daughter of Christie Brinkley and former husband, architect Peter Halsey Cook.

Sailor’s officially all grown up and working as a professional model. We bet mom couldn’t be happier!

She was born to Brinkley and Cook on July 2, 1998 in Bridgehampton, New York. It wasn’t long before the mini-me of Christie Brinkley began modeling, following very much in her moms’ footsteps! But before that, while growing up, her dream was of either becoming a comedian or professional athlete, and during elementary school even took dance lessons, but discovered she actually had stage fright and didn’t perform in any recitals. When she was 15, and after coming along with her mother on photo shoots, she decided that modeling was for, which she began doing at age 15.

Sailor got her start in a editorial feature for Teen Vogue magazine and soon began shooting with big companies like Sports Illustrated Swimsuit in 2017 and 2018. In 2019 she walked the runway at New York Fashion Week and that same year participated on Dancing with the Stars.

In addition to the professional photo shoots, she always makes sure to update her Instagram accordingly!

Sailor recently received some backlash regarding one of the photoshoots she did with Sports Illustrated. SI launched a new project within their company called In Her Own Words. The model posed nude for this project.

According to AOL, the In Her Own Words project is “committed to empowering women through self-expression, voice, and identity.” While the project was intentionally an empowering outlet for women, Fox News reported that the public claims Sailor was objectifying herself with the nude spread.

In response to this, Sailor said, “This project, for me and for the other girls who chose to participate, was about taking our power back. In an industry where it is rare for models to have a say in the content they are being used to create, having total self-control and creative control during the IHOW shoot was true and unbridled self-empowerment.”

Despite the backlash she received for that photoshoot, Sailor is living her best life and is definitely making her mother proud. At only 23 years old, she is thriving!

Be sure to SHARE this if you love Christie Brinkley and her daughter Sailor Brinkley-Cook! Check out our Deep Dive Video of the Top 10 Forgotten 70s Hottest Babes 💔 Then and Now:

Click for next Article
Previous article: Ali MacGraw, Now 83, Made Her Mark In ‘Love Story’ And Later Became A Narrator And Activist
Next Post: Terri Irwin Celebrates 30th Anniversary With Late Steve Irwin