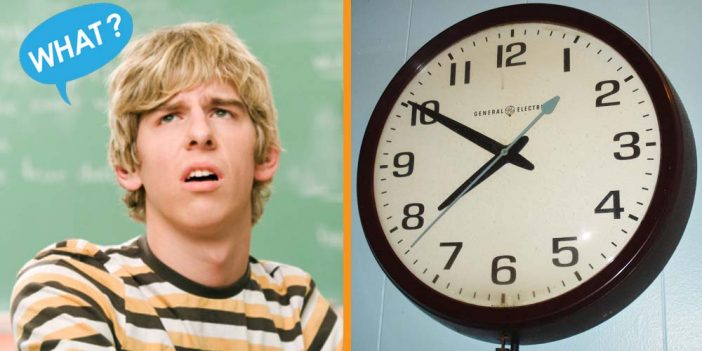 Kids Can Still Read Analog Clocks, phew! They aren’t being removed from all schools. There are articles going around the internet explaining that in the UK they will be removing the clocks because kids can’t read them. That’s not exactly true.

There’s another reason. Stress. Teachers are finding the Clocks to be distracting and increase stress during testing. Particularly times testing. Also, children do take a bit longer to read them nowadays. Which also adds to the distraction.

The good news is they can still read them. Mark it as a win for analog clock literacy.

A lot of everyday items that we all grew up on and were raised to use are drastically dying before our eyes. This month, we can now add analog clocks to that list. Yes, the clock on the wall that we all stared at for various reasons — wanting our classes to end, waiting to run out of class to avoid someone, or even we were daydreaming — are being removed from schools.

Malcolm Trobe, who is the deputy general secretary of U.K’s Association of School and College Leaders, told Telegraph that this generation isn’t as good at reading traditional clocks as older generations were.

“They are used to seeing a digital representation of time on their phone, on their computer. Nearly everything they’ve got is digital so youngsters are just exposed to time being given digitally everywhere,” Malcolm explained.

However, it is not just British kids that have feelings of stress and confusion towards these analog clocks. American kids are reported to be just as stressed out about having analog clocks in classrooms. These kids feel that it is hard to tell the time, especially when taking tests.

Because schools want to make kids comfortable, they are considering switching from analog clocks to digital clocks.

Times are changing, no pun intended. Like a lot of things that we grew up on in the past, analog clocks will soon face the same fate and could be a thing of the past in schools. Only time can tell whether or not they’ll be gone for good.

Do you agree with analog clocks being a thing of the past? Don’t forget to share this article with your friends!