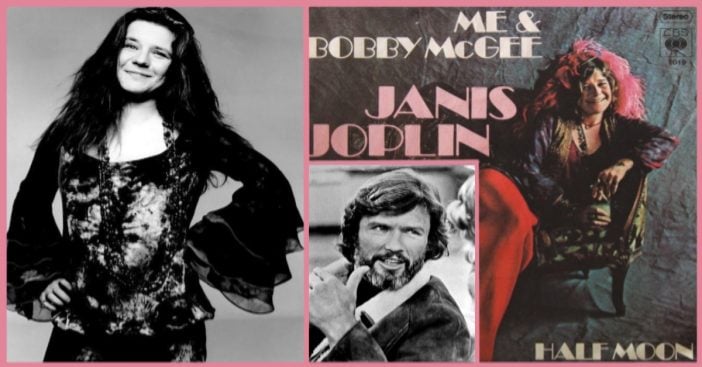 This was written by Kris Kristofferson, who has written hundreds of songs for a wide variety of artists. Kristofferson would become a successful solo artist and appear in several movies, but it was Janis Joplin’s hit cover of this song that brought his career to the next level. “‘Bobby McGee’ was the song that made the difference for me,” he told Performing Songwriter in 2015. “Every time I sing it, I still think of Janis.”

The founder of Kristofferson’s record label, Fred Foster, rang him just as the struggling musician was about to leave Nashville for his helicopter pilot sideline job. He said that he had a song title for the songwriter – “Me And Bobby McKee.” Kristofferson recalled in Mojo magazine March 2008 that his label boss suggested: “‘You could make this thing about them traveling around, the hook is that he turns out to be a she.'”

More about Kristofferson and “Me and Bobby McGee”

Kristofferson was not sure at first. “I hid from Fred for a while but I was trying to write that song all the time I was flying around Baton Rouge and New Orleans. I had the rhythm of a Mickey Newbury song going in the back of my mind, ‘Why You Been Gone So Long,’ and I developed this story of these guys who went around the country kind of like Anthony Quinn and Giuletta Masina in (Fellini’s) La Strada. At one point, like he did, he drove off and left her there. That was ‘Somewhere near Salinas, I let her slip away.’ Later in the film he (Quinn) hears a woman hanging out her clothes, singing the melody she (Masina) used to play on the trombone, and she told him, ‘Oh, she died.’ So he goes out, gets drunk, gets into a fight in a bar and ends up on the beach, howling at the stars. And that was where ‘Freedom’s just another word for nothing left to lose’ came from, because he was free from her, and I guess he would have traded all his tomorrows for another day with her.”

The song’s final defining image came to Kristofferson as he was driving in heavy rain to the airport for the flight home. “I went, ‘With them windshield wipers slapping time and Bobby clapping hands we finally sang up every song the driver knew.’ And that was it.”

“Me and Bobby McGee”

Busted flat in Baton Rouge, waitin’ for a train
And I’s feelin’ near as faded as my jeans
Bobby thumbed a diesel down, just before it rained
It rode us all the way to New Orleans

I pulled my harpoon out of my dirty red bandanna
I was playin’ soft while Bobby sang the blues, yeah
Windshield wipers slappin’ time, I was holdin’ Bobby’s hand in mine
We sang every song that driver knew

From the Kentucky coal mine to the California sun
There Bobby shared the secrets of my soul
Through all kinds of weather, through everything we done
Yeah, Bobby baby kept me from the cold

One day up near Salinas, Lord, I let him slip away
He’s lookin’ for that home, and I hope he finds it
But, I’d trade all of my tomorrows, for a single yesterday
To be holdin’ Bobby’s body next to mine