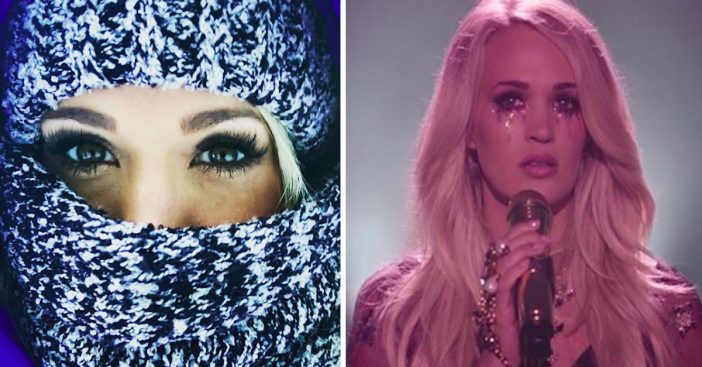 A couple of stitches can’t keep Carrie Underwood down!

In November 2017, Carrie had a frightening accident where she fell and wound up needing over 40 stitches in her face. She also suffered from a broken wrist after the incident. After the fact, Carrie kept her face out of the public eye for a while to keep her recovery private.

She was taking her dogs out for a bathroom break and missed a step. The wrist she tried to catch herself with is the one she wound up breaking. When she felt, she injured her face, right around her mouth.

Carrie penned a letter about the accident to update her fans. She wrote:

“In addition to breaking my wrist, I somehow managed to injure my face as well. I’ll spare you the gruesome details, but when I came out of surgery the night of my fall, the doctor told (husband) Mike (Fisher) that he had put between 40-50 stitches in. Now, here we are 7 weeks later and, even though I’ve had the best people helping me, I’m still healing and not quite looking the same.”

Since her accident, Carrie has been making public appearances over the last few months, but she has been wearing makeup to hide the scarring she has on her face.

Carrie’s new music video was debuted during Sunday night’s episode of American Idol, as Carrie went back to her roots (she won season four of the reality competition series). During her time on AI, Carrie got over 500 million votes and a whopping 37 million for the finale alone, making her the winner.

The new song, “Cry Pretty” is the first single off of her sixth studio album. The video is powerful, as it finds Carrie crying in the shower as she struggles with the pressures of being famous.

By the end, she gloriously takes the stage again. It is pretty to easy to infer she’s injected her accident into the song, with lyrics like:

“I apologize if you don’t like what you see /But sometimes my emotions get the best of me / And falling apart is as human as it gets / You can’t hide it, you can’t fight what the truth is.”

What do you think of Carrie Underwood’s new song? I think she looks incredible!